In this section, we briefly talk about the more common cellular technologies such as CDMA, UMTS, 4G LTE and the new 5G NR. We also discuss a parallel effort called the FCC Repack that is being done in conjunction with the 5G rollout.

CDMA means “Code Division Multiple Access,” and is a term used to describe a type of cellphone service technology. When mobile phones first took over the market in the ‘90s, CDMA and GSM network technologies were the most widely used in the U.S.

This technology uses what’s known as a “spread-spectrum” technique. This allows electromagnetic energy to spread, enabling a stronger signal with more bandwidth. Simply put, it’s what allows several people on the same network to make phone calls and use the internet simultaneously. CDMA technology  separates data and voice packets using codes, transmitting them to a wider frequency range to allow more space for data. That’s how the Verizon network became the gold standard for 3G high-speed mobile internet when cellphones first became popular. Basically CDMA is a continuous data flow, while competing GSM (more along the lines of a 2G technology) used a time division multiplexing (TDMA) scheme. While great for voice, GSM/TDMA couldn’t get the data speeds that CDMA provides.

The following networks use CDMA technology to provide wireless service in the U.S.:

CDMA is a standard that was developed and patented by Qualcomm. Hence every phone either has a chip from Qualcomm or has a chip that’s made under license.

3G CDMA’s days are numbered, as 4G LTE (using OFDM) has been on the market for a number of years, and 5G NR (also using OFDM) is just now getting underway. Carriers would like to get 3G turned off so they can better use the spectrum for ultra fast bandwidth. The expected date for Verizon to turn off 3G CDMA is on December 31, 2020. The Sprint side of T-Mobile (CDMA) will be shut down in December 2022.

Universal Mobile Telecommunications Systems (UMTS), which was used for migrating GSM networks (a 2G technology) to 3G. This was used in the USA primarily by AT&T Mobility and T-Mobile. Generally speaking, GSM carriers throughout the world used UMTS as the successor to their GSM networks. GSM primarily handled the voice, while UMTS handled the data.

UMTS was based on Wideband Code Division Multiple Access (WCDMA) and could offer peak downlink speeds of up to 2 Mbps. Since GSM, GPRS and EDGE used a different radio access technology, the UMTS migration required the radio base stations to be upgraded for supporting WCDMA. UMTS networks used the same packet-switched approach that GPRS and EDGE used and made use of SGSN and GGSN in the core network to support mobile data services. Since UMTS networks were designed to co-exist with the GSM networks, they were well-integrated to make sure that inter-technology handovers (IRAT – Inter Radio Access Technology) could take place. The high-level architecture of the WCDMA based UMTS networks can be seen in the diagram below. 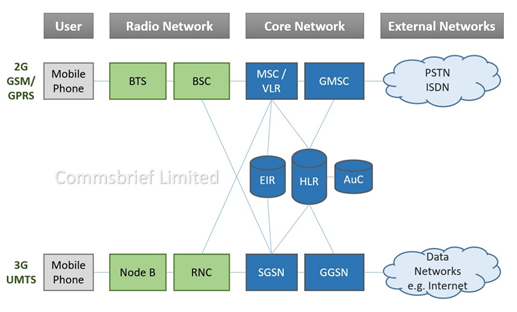 As with CDMA, UMTS’s days are numbered as well. AT&T plans to turn off GSM/UMTS in February 2022 and T-Mobile plans on turning off GSM/UMTS 3G in January 2021.

4G is the generic name for Long Term Evolution (LTE) as the next standard in wireless communications. 4G is the first time where data became king rather than voice. Though CDMA and it’s cousin on the GSM side W-CDMA were widely considered to be good data standards, a new technology was on the horizon that would revolutionize things. 4G LTE utilizes Orthogonal Frequency Division Multiplexing (OFDM) as its modulation scheme. OFDM uses multiple carriers simultaneously that are orthogonal (or 90 degrees) from each other so they don’t interfere with each other. So in other words you can have multiple carrier frequencies in use at the same time in a smaller amount of physical bandwidth. This allows the data rates for 4G LTE to be between 75 Mbps and upwards of 300 Mbps (mega bits per second).

And for the first time, all of the major US carriers when 4G was rolled out (Verizon, Sprint, T-Mobile and AT&T Mobility) all went to 4G. In fact, all of the US carriers and even worldwide carriers all went with 4G LTE (using OFDM) as their underlying technology. Most of their respective phones (even of the same model) were backwards compatible with their respective 2G and 3G networks, and for a limited time even was able to do 1G analog AMPS. Over time, new 4G phones dropped 1G and 2G compatibility and soon will lose 3G compatibility. (Especially moving to 5G phones as noted below.)

As mentioned before, 4G LTE finally put data first, as that’s the primary reason for moving to 4G. With this, voice can either be used in the traditional sense (GSM or CDMA) or utilizing a new standard called Voice over LTE or VoLTE. This is basically voice over the data path, instead of a dedicated data path or having data on the voice path. All major US carriers are now capable of using VoLTE if the handsets are compatible with it (most are). The regular Public Switched Telephone Network (PSTN) is only limited to 3 KHz bandwidth, so they can’t take advantage of VoLTE calls to/from cellular phones, but cell to cell calls CAN take advantage of VoLTE, which uses an expanded 8 KHz bandwidth. So the calls actually sound more realistic as it uses a higher bandwidth, finally getting away from the PSTN restriction of 3 KHz. They don’t sound as bad as former cell to cell calls used to do as they use much better Codecs and the aforementioned increased bandwidth.

From a pure technology perspective, 5G and 4G are very similar to each other – and for the most part can coexist rather well. The major differences of 5G and 4G is the capability of utilizing newly created frequency bands to provide an enormous amount of bandwidth. This brings two major advantages over 4G: 1) Helps eliminate bandwidth saturation and 2) Provides extremely fast data speeds to the end user device. Like it’s older brother 4G LTE, 5G NR utilizes OFDM as its underlying modulation scheme.

5G basically comes in two flavors – the frequency spectrum below 6 GHz (low and mid band) and the spectrum above 6 GHz (high band). 6 GHz and below, 5G is very similar to 4G. But in order to obtain the super high speed data rates, a new radio technology (NR) is being introduced into the phones. This allows the phone to use milometer wave (mmWave) technologies. This will be typically used around the 28 GHz frequency spectrum. The advantage is much more bandwidth. The disadvantage is the distances of mmWave is extremely short. As most cellular systems are in the spectrum of 600 MHz to 2.1 GHz, they can go for a considerable range of several miles or kilometers from the tower (though limited to the maximum time delay allowed by OFDM). But the laws of physics come into play here. As you increase frequency, the distance that the wave travels decreases for the same power output. Hence the higher you go, the shorter the distance. Hence the massively fast speeds that 5G promises is only realized at the higher frequencies and being really close to the tower.

My guess this will be good in urban settings (with towers on top of high buildings) or in closed facilities (such as a convention center or sports stadium) where you will have a high amount of users in a small space. Otherwise, it’s slightly better than 4G in the spectrum lower than 6 GHz as its limited to the existing bandwidth limitations as 4G, though it could conceivably use multiple carriers in multiple bands simultaneously.

Going on at the same time as the 5G rollout is something called the FCC Repack, technically known as the 2016 US wireless spectrum auction. This just happened to take place about the same time as 5G, but it’s just a reallocation of existing spectrum in the “low band” frequency spectrum area. As mentioned above, distance and frequency are related. The lower the frequency, the greater the distance given the same power level. So the lower the frequency, the greater the distance (at least in theory).

As people know, the UHF TV spectrum originally went from Channel 14 to Channel 83. In many areas, hardly any of this frequency spectrum was ever used. For TV stations, the higher the frequency, the shorter the distance – just like in cellular. But TV station towers tend to be small in number and far away from the actual users. So it was (and still is) advantageous to be lower in frequency as possible (at least in the analog days. ATSC 1.0 changed that as it works much better in UHF, though ATSC 3.0 may be a different story).

So with wireless carriers hungry for low band spectrum, the FCC basically has kept chopping away at the upper UHF TV spectrum over the course of time. The first channels to disappear were from Channels 70 to 83. This became the infamous “800 MHz” spectrum for the original A and B and AMPS bands. These are now being used as 3G bands that will soon be reclaimed for 4G and 5G bands moving forward.

The second set of channels to disappear was from Channels 52 to 68. These disappeared at the same time as the sunset from analog NTSC broadcasts to digital broadcasts (now retroactively known as ATSC 1.0). This is known as the 700 MHz spectrum. Modern 4G LTE data and voice is now using this band.

A new digital TV standard known as ATSC 3.0 is now on the verge of being released as of this writing in late 2020. This will further allow TV stations to better use the existing channel spectrum that they are assigned, and allows for the FCC to auction off even more UHF channel spectrum to wireless companies. So between 2018 and 2020, TV stations that were above Channel 37 were forced to move down to move to between Channels 2 and 36 (VHF and UHF) by July 2020.

So as 5G is rolling out, the newly created 600 MHz spectrum is now becoming available. Though it won’t be available right away, over time the 600 MHz spectrum will eventually become part of the 5G wireless spectrum bands as a new “low band”.

We had to start somewhere. A hybrid analog/digital cellular phone system

Moving away from analog to first generation digital phone systems

The modern era of wireless phones, where data is king