The following is a technical history of the former North Pittsburgh Telephone Company from 1960 through 1982, based upon the Telephone World webmaster’s personal perspective. This also includes research through newspaper archives such as the Pittsburgh Press and the North Hills News Record (both defunct).

1977 – In April 1977 (according to the following picture of an ash tray that was sold on the Internet), NPT installed an Automatic Electric #1EAX (Electronic Automatic eXchange) at the Gibsonia headquarters. The #1EAX was invented in 1972 as a Class 5 end office and was later modified to perform Class 4 tandem functions. The #1EAX was AE’s attempt at an (analog) electronic telephone switch, similar to Western Electric’s #1ESS (Electronic Switching System, circa 1965). NPT’s implementation of their #1EAX was both Class 4 and Class 5 functions. 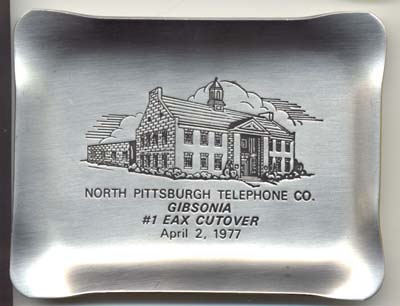 Ash Tray depicting the cut over date of the Gibsonia #1EAX

The strange part of their implementation was that NPT continued to use the Step by Step switch that was already in service. The Step by Step served the 2, 3 and 9 thousand blocks, while the #1AEX served the other thousand blocks. The Gibsonia SxS also served as the tandem for the other Step by Step switches in the North Pittsburgh territory. This “split system” arrangement is quite rare and lasted until June 1987 (see later on this page). It is believed that they started with the Step switch, and when they outgrew it, they installed the #1EAX switch.

1978-1980 – The Wexford and Criders Corners (Cranberry Township) exchanges were replaced with second-generation Automatic Electric #2EAX switches (still analog, more like the Western Electric #2ESS & #3ESS switches). These switches used the #1EAX as their direct tandem and not the Step by Step switch in Gibsonia. About this time, Wexford got local calling with Perrysville (364, 366, 367 exchanges) and Criders Corners got local calling with Zelienople (452 exchange).

1982 – The status of North Pittsburgh was as follows:

Gibsonia had both the Step by Step and #1EAX switches (on the same prefix!), Wexford and Criders Corners were #2EAX, and the rest were Step by Step.

The chart below shows the arrangement based upon prefix, ratecenter name, the actual areas served, and the switch type. Note that the 443 (Gibsonia) central office code (prefix) had both the Step by Step and #1EAX switches.

Note: At this time, the Saxonburg exchange had two distinct switches. The main exchange was in Saxonburg, the other in Sarver. It is believed that today the Sarver switch was replaced with a Digital Loop Carrier (DLC) junction point. According to modern documentation, there is only one switch in the Saxonburg exchange.

Call Routing by the early 1980s

All toll calls and most calls between exchanges uses the #1EAX switch as a tandem. Prior to the installation of the #1EAX in 1977, the Step by Step that served the Gibsonia ratecenter served as the tandem.

If you called a non working number in an exchange served by an electronic switch, your call was sent to a Cognetronics brand of Automated Intercept System (AIS) that resided just off the #1AEX in Gibsonia with MF signalling tones from the #1AEX. The system read the number you dialed and the reason why the call could not be completed. A typical recording went like this: “The number you have dialed… xxx-xxxx is not in service. Please call your operator for assistance. This is a recording. Thank you.” In later years, the recording was adapted to inform users that the number was in the 412 area code.

The Step by Step systems and some recordings on the #1EAX and #2EAX systems used “Centralized Intercept” voice recordings that told you that the number you dialed was not in service. These recordings had a “suffix” to tell you which switch you were on. These were in the format of ‘NPTxE’ where the ‘x’ was usually the first digit of the prefix (example: NPT7E was Criders Corners/Cranberry Twp.)

All calls to the Step by Step exchanges from either outside the company or from the three “electronic” switches went through the Gibsonia #1EAX, operating as a regional tandem. (I am not sure if a call originating on a step switch and ended on another step switch had direct trunks, or was routed via the #1EAX operating as a tandem.)

The step systems were dial pulsed via the #1EAX (used as a regional tandem). I assume this was done via direct trunks with interrupting current and not in-band or out-of-band signaling. There was a very noticeable and distinct clicking sound as it pulsed dialed. The clicking did not start until after you dialed the first 3 digits of the prefix. You could also hear this when you called in long distance from outside NPTCo’s territory.

The “clicks” were usually coded for a particular prefix. Most used a 2 digit code that MIGHT have been the last 2 digits of the prefix, then the 4 digits of the phone number. I assume this was either the fact that the first digit was absorbed in the switch, or it used the Gibsonia Step by Step switch as a step tandem. The exception to the “code” was the Freeport exchange (295) where only the last 4 digits were dialed. Even if you were on a rotary phone (instead of Touch-Tone) it pulsed after you dialed each digit or series of digits.

Interesting note – Early on, the Gibsonia #1EAX switch (operating as a tandem) also pulsed dialed long distance calls to neighboring Butler, PA (then United Telephone) when it too was a SxS system. All of Butler County was equipped for 911 calls. I “accidentally” found out that when you dialed into the 284 prefix in Butler (then a mostly unpopulated prefix), you could reach the 911 operator by dialing 284-911x (where x is any digit). Fortunately they never figured out where the calls were coming from… (grin)

In the Step by Step switches, there were DTMF (Touch Tone) converters on the linefinders. This allowed Touch Tone service for all phones. (Most pay phones, for example, were DTMF by 1982). As a result, the dial tone on the Step by Step switches was the modern dial tone we know of today. Other signaling tones (ringback, busy, reorder) were produced by the tone plants at each switch.

Making calls form pay phones (circa 1982) – All pay phones served by Step by Step switches in Allegheny county were “Coin First”. Pay phones that were served by the Wexford exchange (935) were “Dial Tone First” since it was an electronic switch. Pay phones in Butler county were all “Dial Tone First” regardless if it was a were a Step by Step or electronic switch. The reason was that Butler county had 911 service and wanted people to be able to dial 911 without the use a coin.

Operator Services: There was no “0+” dialing at that time and all operator functions were served from a “coardboard” operator station attached to the SxS switch at the Gibsonia office.

Dialing into New Castle, PA (then 652, 654, 657) was done with MF with direct trunks and was put on a noisy microwave trunk. But when the called party answered, the noise went away and it was a clear conversation. It could be that 2600Hz signaling was present on the trunk but was not properly filtered.

Operators are Outsourced – Changes in 1982 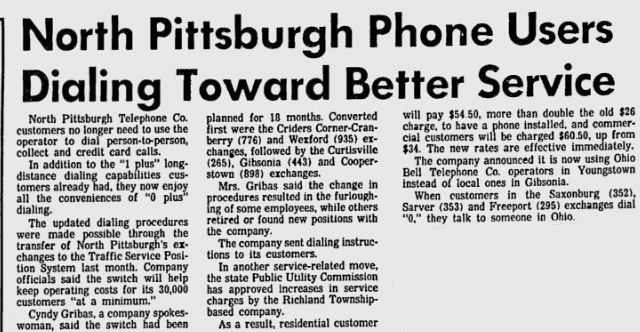 (Note – This arrangement lasted until the mid to late 1980s, when at that time intra-LATA operator services were changed to Bell Atlantic/Verizon – branded as North Pittsburgh Telephone.)

When you dialed an Operator-Assisted call, the #1EAX tandem connected you to the Bell/AT&T operator via a long distance trunk (via a noisy microwave link). The #1EAX tandem dialed a string of MF digits of the number you dialed, a short pause (while the trunk flashed or “winked” the appropriate tone), then a string of MF digits of the area code (then 412) and the number you were dialing from (serving as Automatic Number Identification or ANI).

Note – This arrangement lasted until the mid to late 1980s, when at that time intra-LATA operator services were changed to Bell Atlantic/Verizon – branded as North Pittsburgh Telephone.

1982 – Penn Telecom resells AT&T long distance at cheaper (bulk) rates by developing a Feature Group “A” system (7-digit number & 5 number PIN access) called Penn Telecom DART (Distance Area Reduced Toll) service. When the service was first started, this was on some sort of PBX-like system and did not have the ability to provide proper supervision for billing purposes. Hence, each and ever call got billed at least for 1 minute minimum, even if the called party did not answer. (Note – when the system was moved to the DMS-100 in 1983, this problem was solved).