Direct distance dialing (DDD) is a telecommunication service feature in North America by which a caller may, without operator assistance, call any other user outside the local calling area. Direct dialing by subscribers typically requires extra digits to be dialed as prefixes to the directory telephone number of the destination. International Direct Distance Dialing (IDDD) extends the system beyond the geographic boundaries of the North American Numbering Plan (NANP).

The first direct-dialed long-distance telephone calls were possible in the New Jersey communities of Englewood and Teaneck. Customers of the ENglewood 3, ENglewood 4 and TEaneck 7 exchanges, who could already dial telephone numbers in the New York City area, could place calls to eleven major cities across the United States by dialing the three-digit area code and the seven-digit directory number. Local telephone numbers still consisted of the first two letters of the central office name and five digits. On November 10, 1951, Englewood Mayor M. Leslie Denning made the first customer-dialed long-distance call, to Mayor Frank Osborne of Alameda, California. 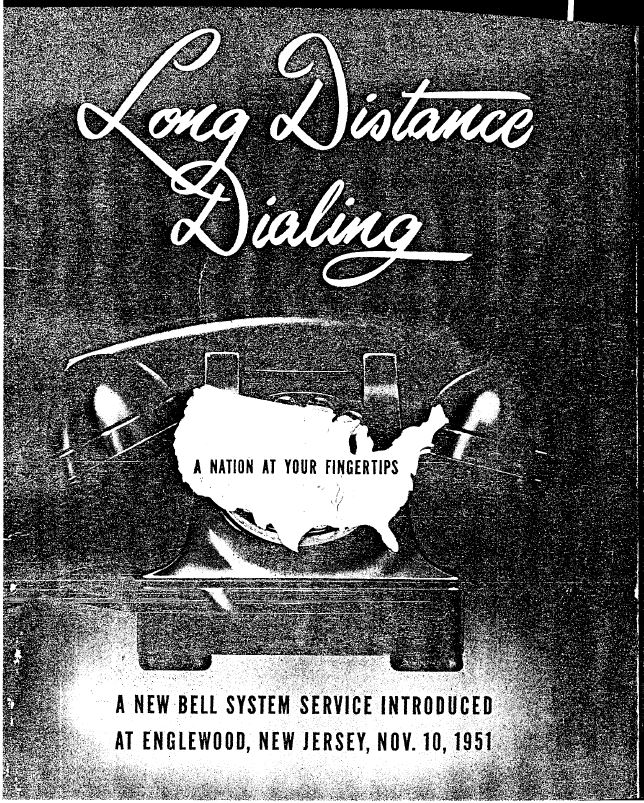 Cover for the instruction booklet on how dial DDD calls from Englewood, NJ

The destinations, and their area codes, equipped with a long-distance toll-switch at that time were: 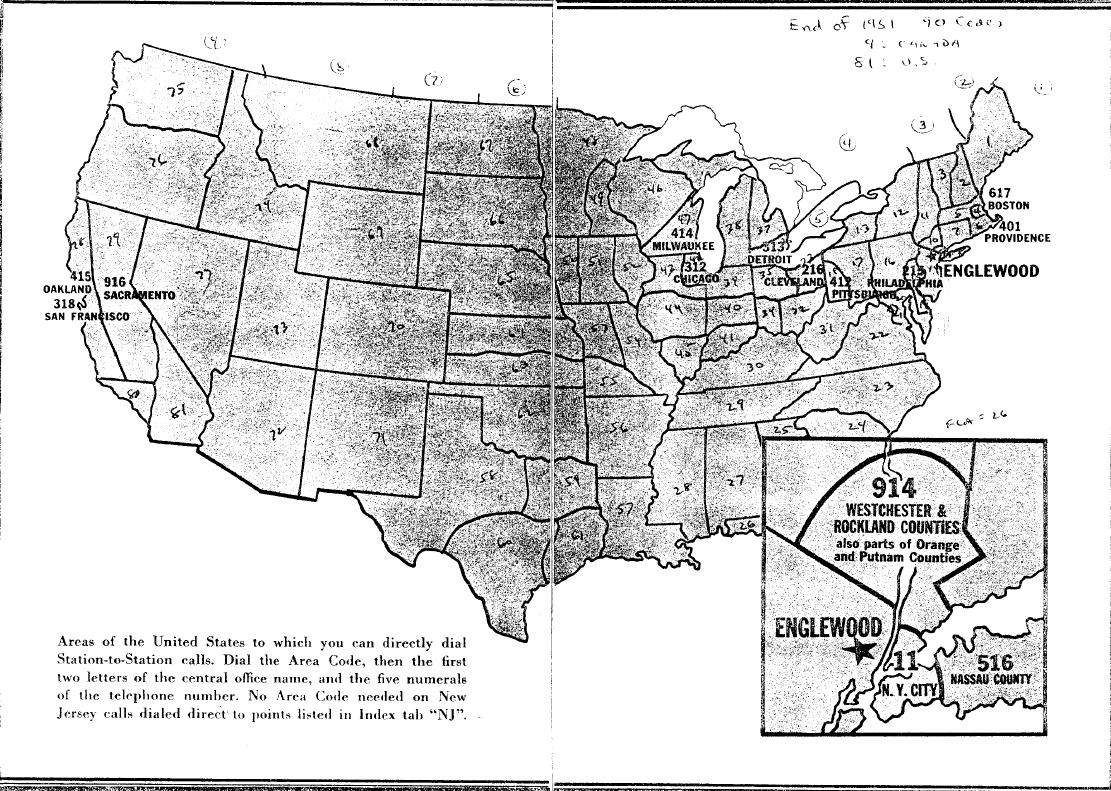 This map shows the limited amount of areas that was DDD dialable at the time. (Note someone marked up the map with the number of area codes at the time, though not all were customer dialable in 1951)

Some cities could not yet be included in DDD as they did not yet have the necessary toll switching equipment to handle incoming calls automatically, or because they still did not use a local seven-digit numbering system. Many towns had 4, 5, or 6 digit local dialing. Until all towns were upgraded to 7 digit local dialing, they were unable to make outbound DDD calls (or to some degree, receive inbound DDD calls). Most towns were able to fully send and receive most DDD (and in some cases IDDD) by the mid 1970s.

San Francisco required the special code 318 for temporary routing requirements. San Francisco and Oakland each had their own separate toll-switches, so calls had to be routed accordingly depending on the final destination. As the telephone equipment used at the time could only handle three-digit translation, the temporary use of area code 318 was required to distinguish between the two areas. Area code 318 was temporarily used to specify San Francisco and areas north of the Golden Gate, while calls with destinations in Oakland and the East Bay continued to use area code 415. When the electromechanical card-translator box became available sometime during 1952–53, six-digit translation became possible and the use of area code 318 was no longer required. Area code 318 was reclaimed for future use, and the entire San Francisco Bay Area returned to using area code 415.

The No. 4 Crossbar switching system had been introduced in the early 1940s to switch four-wire circuits and replace the incoming operator. With semiautomatic operation analogous to the early days of the panel switch, the operator in the originating city used a multifrequency keypad to dial an access code to connect to the correct city and to send the seven-digit number to incoming equipment at the terminating city. This design was further refined to serve DDD.

The card sorter of the 4A/CTS (Number 4A Crossbar / Card Translator System) allowed six-digit translation of the central office code number dialed by the customer. This determined the proper trunk circuits to use, where separate circuit groups were used for different cities in the same area code, as in the case of Oakland and San Francisco. The new device used metal cards similar in principle to computer punched cards, and they were rapidly scanned as they fell past a light beam. CTS machines were called 4A (Advanced) if the translator was included in the original installation, and 4M (Modified) if it was added later. A 1970s version of 4XB, the 4A/ETS, used a computer to translate. For international dialing, Traffic Service Position System (TSPS) provided the extra computer power.

The reach of DDD was limited due to the inefficiency and expense of switching equipment, and the limited ability to process records of completed calls. An early obstacle was that the majority of switching systems did not provide Automatic Number Identification (ANI). Common control switches, such as the 1XB switch, were fairly quickly retrofitted to provide ANI, and most 5XB switches were initially installed with ANI services. Panel switch were eventually retrofitted, as were some step-by-step systems that were not scheduled for immediate replacement. Even if a switch had ANI, it could not identify callers on party lines. This was only partly overcome by tip-party identification for two-party lines. And in other areas, people on multi-party lines had a special “circle digit” that the subscriber would dial to identify which customer they were on a party line. As the cost of subscriber line carrier declined and switches were able to better handle customers, party lines were gradually phased out.

As this and other improved technologies became available, as well as Automatic Message Accounting (AMA) computers to process the long-distance records into customer bills, the reach of DDD was slow in the 1950s, but quickened in the early 1960s. Electronic switching systems allowed electronic processing of the dialed digits, referring to electronic memories to determine call routing, and this has reached the state of the art, with digital telephone exchanges which are basically specialized computers that route voice traffic from one “peripheral” to another as digital data. Call routing can now be done based on the area code, central office code and even the first two digits of the line number, although routing based on digits past the central office code is usually limited to cases of competitive local exchange carriers, number pooling and number portability.

In the 1960s, with the domestic conversion still underway, plans were laid to extend Direct Distance Dialing beyond North America (including a number of the Caribbean Islands). Some subscribers could already directly dial transatlantic telephone calls to certain destinations as early as in 1957 over the recently completed Atlantic cable to England. A new systematic extension of Direct Distance Dialing was developed and was introduced as International Direct Distance Dialing (IDDD) in March 1970.

Most existing equipment in the AT&T Long Lines network could not handle more than the requisite ten-digit telephone numbers of DDD, the new system was based on designs by which most toll offices did not have to store and forward the whole international telephone number. Gateway offices were set up in New York, London and Paris, connected to the ordinary automatic toll network. The New York gateway was at 32 Avenue of the Americas. The new LT1 5XB switch on the tenth floor of 435 West 50th Street received new originating registers and outgoing senders able to handle fifteen-digit telephone numbers, with appropriate modifications to completing markers and other equipment. Other 5XB in the next few years were installed with IDDD as original equipment, and in the 1970s most 1ESS/1AESS switches were able to perform the function.

The key to the new system was two-stage multi-frequency pulsing. The outgoing sender sent its Class 4 toll center an off-hook signal as usual, received a wink as usual as a “proceed to send” signal, and outpulsed only a special three-digit (later six-digit) access code. The toll center picked a trunk through the long-distance network to the gateway office, which sent a second wink to the originating office, which then sent the whole dialed number. Thus the toll switching system needed no modification except at the gateway. The international trunks used Signaling System No. 5, a “North Atlantic” version of the North American multi-frequency signaling system, with minor modifications including slightly higher digit rate. European MF systems of the time used compelled signaling, which would slow down too much on a long transoceanic connection.

In the 1970s, toll centers were modified by adding the Traffic Service Position System (TSPS). With these new computers in place, digit storage in the toll system was no longer a problem. End offices were less extensively modified, and sent all their digits in a single stream. TSPS handled the gateway codes and other complexities of toll connections to the gateway office.