Overview & Discussion on Softswitches, the next generation of telephone switching systems in the Public Switched Telephone Network.

The Internet and the technologies that are used with the Internet changed the idea of how communications are handled. Traditional telephone company technologies were direct point-to-point systems where dedicated “trunks” (toll circuit routes) were used. Once a trunk was allocated, the trunk stayed up for the entire connection. If a trunk was not being used, it sat idle – underutilizing limited resources.

The Internet (TCP/IP and Ethernet in particular) uses a completely different paradigm (methodology). In the TCP/IP world, all systems share a common connection. Each system (usually a computer) was connected to this common system and shared “bandwidth” with other people. Resources were not allocated for just one user, but all users can share resources.

Another advantage of using TCP/IP technology is the switching “matrix” is also different and more efficient. Instead of using a dedicated switching matrix – with a limited amount of circuits in a traditional telephone switch, TCP/IP routers (traffic handlers) could be used. This increases the amount of switching “lines” and can do it more efficiently than traditional switching systems since all the switching is done on a “virtual” scale in software rather than in hardware.

Telephone systems have been slowly adopting the “IP” (Internet Protocol) technology over the last 8 to 10 years. Early experiments proved that voice can be converted to digital “packets” and sent over the Internet. The packets would be collected and converted back to analog voice. The quality of the calls was not great but it showed that it could be done. The major problem was something called “packet loss” which is common with TCP/IP connections.

By the early 2000s, the IP telephony (or “VoIP” – Voice over Internet Protocol) technology had improved. Using “classes” of service, reliable connections could be obtained and packet loss reduced to minimum levels. Business systems started using VoIP technology in their PBX (Private Branch Exchange) switches. The telephones themselves were almost like small computers that had their own analog/digital conversion systems and TCP/IP networking technology all the same system. The phone could “piggy-back” on their existing computer network system. Hence having voice AND data traffic over the same wires!

Telephone companies – both local and toll – are also handling data traffic at alarming rates. For example, AT&T is handling 5 to 10 times more data traffic than it handles for traditional voice traffic. To handle both efficiently – it would be cost effective to have switching systems that handle data switching on a high volume scale – that can serve both the voice market AND the data market at the same time.

As of 2006, there are a number of vendors who manufacture softswitches that are being used on the public switched telephone network.

For example, Lucent and Nortel are manufuacturing softswitches that are are add-ons to their existing digital (time division multiplex) switches and are fully backawards compatible.

Lucent’s softswitching switching system is known as the Lucent SoftSwitch (LSS) . It builds upon the traditional #5ESS switch and handles both data and voice.

Installation of softswitches in the public switched network is ongoing. For example, EMBARQ (soon to be part of CenturyTel) started installing Nortel Communications Server 2000 switches in various places nationwide starting in the fall of 2003, including cities such as Las Vegas, NV.

Other traditional swtich manufacturers have been making softswitches as well. Siemens of Germany has been making the SURPASS line of swtiches. The SURPASS hiQ 8000 Softswitch provides the switching matrix while the SURPASS hiG 1200 Media Gateway interfaces tradtional digital time-division multiplex swtiches to VoIP technology.

Other manufacturers of softswitches include CopperCom. For example, local telephone providers in Iowa in 2005 and 2006 replaced their older Vidar and Mitel switching systems with CopperCom Converged Switching eXchange (CSX) softswitching systems. 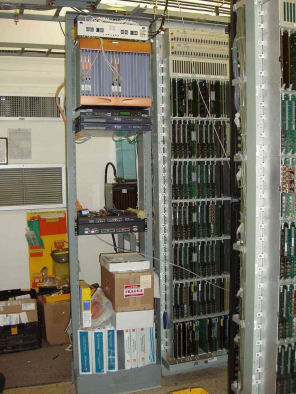