The Step by Step switching system was invented in 1888 and patented in 1891 by Almon Strowger, an undertaker in Kansas City, MO USA. Rumor has it that the local switchboard operator was diverting calls from his business to others. He wanted to have some way to have calls automatically routed to the destination without the intervention of an operator.

His invention had changed throughout the years, but the basic concept has remained the same. The system operates by using rotating “selectors” that can select a “level” (or step) by the number of pulses that are interrupted on a line (using a “rotary” telephone). This instructed a solenoid to move this wiper (or selector) to a particular position based on the number of pulses it had received. This then put the caller on another level and again pulse dialed to get to another level and so on until the caller had reached the subscriber they were calling on the last level (or digit they dialed).

The addition of a line finder selector to reduce the number of switching selectors that were needed (one for every 10 or more subscribers, instead of one for each subscriber). Additional circuitry was later added to add a “tone plant” to provide progress and informational tones such as dial tones, ringback tones and the like.

There were many variants to the step by step. One was called the “XY” switch made by Stromberg-Carlson. This was a two-axis (horizontal & vertical). It was a flat mechanism, and the moving contacts moved both back and forth and side to side. This was considered to be a simpler and cheaper version of the Strowger Step by Step, and was commonly used in rural areas of the mid-western United States.

Common manufacturers of Step-by-Step switches and their variants that were used in North America:

Note: A number of these companies made Step-by-Step switches with licenses from Western Electric or Automatic Electric. 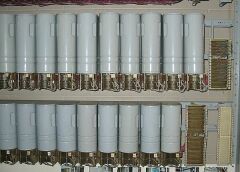