Bell/AT&T Labs was trying to invent a new type of switching system that didn’t have mechanical parts. Their first field trial attempt was the Morris, Illinois experiment from 1960 to 1962. This used a “cold cathode” vacuum tube technology. This experiment lasted a little bit more than a year and was later scrapped for the fully transistorized Number 1 ESS (#1ESS) system in 1965. 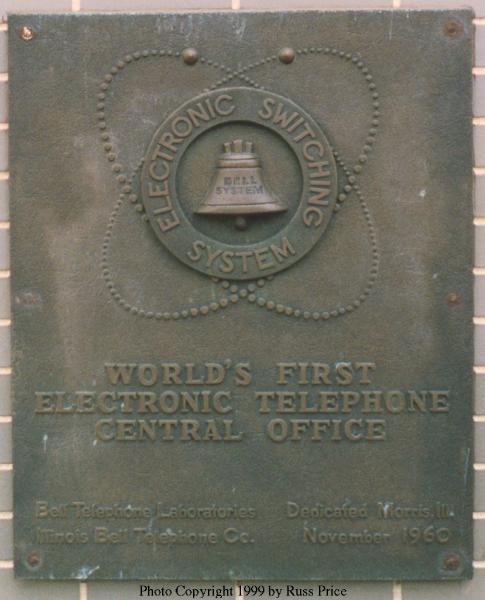 In early 1960, the world’s first electronic switching system was installed at the Morris central office. The system was a milestone in telephone switching history, an experiment whose planning started in the early 1950s, and led to the largest sustained research and development program toward a single goal in the Bell System. After conversion of the existing manual telephone system using telephone operators for completing telephone calls, with an automatic electromechanical crossbar switching system starting in ca. 1958, a few hundred subscribers received dial service from June 1960 through January 1962 from the first mostly electronic system, that used cold-cathode electron tubes, instead of mechanical relays and switches. For telephone subscribers, the most notable characteristic of what is usually called the Morris System was the use of electronic tone ringers which used up to eight different tones produced by a tweeter, rather than the traditional bell ringer.

Background on the Morris, IL Experiment

The Morris, IL experiment was conducted between 1958 and 1962. This involved using a stored program control switch that used “cold cathode” gas tubes.

The phones used on the system were rotary, but were 20 pulses per second rather than the regular 10.

The switch was not in use 24 hours per day and customers had two telephones. One was used with the existing #5 crossbar switch, one was for the experimental switch.

The experimental switch didn’t have a traditional tone plant, and used an electronic tone plant. These tones were not used in the later ESS system.

The switch was unable to produce the amount of current required for mechanical ringers. The experimental phones had special electronic ringers instead (the first of its kind)

The experiment ended in 1962 and the project was scrapped in favor of fully transistorized systems, such as the 1ESS (Number 1 Electronic Switching System) which was introduced in 1965.

The following is a plaque that was installed at the central office where the experimental switch was located.

Article from Telecom Digest on the history of Morris, IL (and other ESS research)

There were a number of experimental electronic switching systems before the #1ESS. Interestingly, an early Bell System experimental system, in 1953, involved pole-mounted concentrators remotely controlled by a #5 crossbar at the central office. Field trials were conducted in LaGrange, IL, Englewood, NJ, and Freeport, LI. Further experimental work was done on distributed switching, but the notion of active components in outside plant was premature; components were not yet reliable enough. So the #1ESS was, like its electromagnetic predecessors, designed with all the active components in the central office.

The system installed in Morris, IL in 1958 was in some ways “more electronic” than the #1ESS system. Unlike the #1ESS, which uses reed relay type devices for the actual call switching, the Morris system used cold-cathode gas tubes. So, unlike #1ESS, Morris had no moving parts. But Morris required special telephone sets, with active components, because the gas-discharge tubes couldn’t handle the usual 86V ringing signal. Coin lines, PBX lines, and loop testing, all of which use nonstandard voltages, were not supported at all.

Pictures of the Morris switch show a truly strange-looking system. The gas-discharge tubes had to be illuminated by fluorescent lamps to provide enough free electrons so that the tubes would ionize quickly. So the banks of tubes sat in brightly lit racks with built-in fluorescent tubes running vertically down the racks.

[Source: A History of Engineering in the Bell System, Switching Technology, 1925-1975.]