The following is Part 6 in a series on the history of the telephone, mostly from an American perspective. These pages are researched and written by Tom Farley and the original can be found at privateline.com

At this point we need to look back a few years. In 1906 Lee De Forest invented the three element electron tube. Its properties led the way to national phone service. Long distance service was previously limited to 1,500 miles or so. Loading coils and larger, thicker cables helped transmission to a point but no further. There was still too much loss in a telephone line for a voice signal to reach across the country. Transcontinental phone traffic wasn’t possible, consequently, so a national network was beyond reach. Something else was needed. In 1907 Theodore Vail instructed AT&T’s research staff to build an electronic amplifier based on their own findings and De Forest’s pioneering work. They made some progress but not as much as De Forest did on his own.

The most popular book on De Forest is Empire of the Air : The Men Who Made Radio by Tom Lewis.

AT&T eventually bought his patent rights to use the tube in their telephone amplifier. Only after this and a year of inspecting De Forest’s equipment did the Bell Telephone Laboratory make the triode work for telephony. Those years of research were worth it. Electron tube based amplifiers would make possible radiotelephony, microwave transmission, radar, television, and hundreds of other technologies. Telephone repeaters could now span the country, enabling a nationwide telephone system, fulfilling Alexander Graham Bell’s 1878 vision.

Recalling those years in an important interview with the IEEE, Lloyd Espenschied recounts “In May [1907], several of us had gone to a lecture that Lee De Forest had given on wireless at the Brooklyn Institute of Arts and Sciences. In this lecture, he passed around a queer little tube to all the audience. It was the first three-element tube to be shown in public, I found out afterwards. He passed this around and everybody looked at it and said, “So what!” Even De Forest said that he didn’t know what it was all about. He looked on it as a detector. [an early device to pick up radio waves, ed.] Actually it was an evolution of the Fleming valve, but he would never give credit to anyone.” Later in the interview, Espenschied gives an opinion of De Forest shared by many at the time, “No, he was no engineer. He was just a playboy all his life. He’s just plain lucky that he stumbled into the three- element device. Just plain lucky. But that was handed to him for persevering; he kept at it, grabbing and grabbing at all the patent applications without knowing what he was doing.” 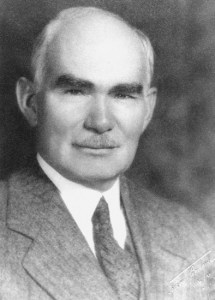 Lee De Forest. From the IEEE.

Luck or not, De Forest was first to build and then exploit the the three element tube. It later enabled the vacuum tube repeater which ushered in telephony’s electronics age.

A triode is sometimes called a thermionic valve. Thermions are electrons derived from a heated source. A valve describes the tube’s properties: current flows in one direction but not the other. Think of a faucet, a type of control valve, letting water go in only one direction. This controlled flow of electrons, not just electricity itself, marks the end of the electrical age and the beginning of the electronic age.

Armstrong later developed the regenerative circuit which fed back the input signal into the circuit over and over again. In electronic books of the era many called him “Feedback Armstrong.” His circuit amplified the signal far more than original designs, allowing great wireless or wireline transmission signal strength. The feedback circuit could also be overdriven, fed back so many times that supplying a small current would develop an extremely high frequency. The circuit would thus resonate at the frequency of a radio wave, letting the triode receive or detect signals, not just transmit them. DeForest later claimed to have invented regeneration; this was a lie. DeForest invented the three element tube by trial and error; he did not even understand how it worked until five years later when Edwin Armstrong explained it.

More on this regarding radio is here (internal link)

As evidence of the triode’s success, on January 25, 1915 the first transcontinental telephone line opened between New York City and San Francisco. The previous long distance limit was New York to Denver, and only then with some shouting. Two metallic circuits made up the line; it used 2,500 tons of hard-drawn copper wire, 130,000 poles and countless loading coils. Three vacuum tube repeaters along the way boosted the signal. It was the world’s longest telephone line. In a grand ceremony, 68 year old Alexander Graham Bell in New York City made the ceremonial first call to his old friend Thomas Watson in San Francisco. In an insult to Lee de Forest, the inventor was not invited to participate. This insult was carried over to the 1915 World’s Fair in San Francisco, in which AT&T’s theater exhibit heralded coast to coast telephone service without mentioning the man who made it possible. [Morgan]

In 1919 Theodore Gary and Company bought the Automatic Electric Company. Years later, when A.E. became AG Communication Systems, the AGCS website said “Theodore Gary aimed to cash in on the accelerating trend of replacing manual labor with machinery, and saw great potential in the Bell System market. Gary formed a syndicate that secured an option on the majority of Automatic Electric Company common stock. In 1919, he exercised his option to purchase the company.”

Since Automatic Electric didn’t manufacture for the Bell System the words “potential in the Bell System market” means licensing potential. Indeed, the AGCS site goes on to say that, “By the mid-1920s, AE was licensing about 80 percent of the automatic telephone equipment in the world. It became the second largest telecommunications manufacturer in the United States after Western Electric.”

Finally, on November 8, 1919, in what must have been a humiliating experience for the telecommunications giant, AT&T at last introduced large scale automatic switching equipment to their telephone system. Using step by step equipment made, bought, and installed by Automatic Electric. The cut over to dial in Norfolk, Virginia was a complete Bell System policy change. No longer would they convert automatic dial systems to manual as they bought independent telephone companies, but they would instead embrace step by step equipment and install more.

More on the many mergers of Automatic Electric is here

In 1921 the Bell System introduced the first commercial panel switch, a very odd invention. Developed over eight years, it was AT&T’s response to the automatic dialing feature offered by step by step equipment. It offered many innovations and many problems. Although customers could dial out themselves, the number of parts and its operating method made it noisy for callers. Paradoxically, some switchmen say it was a quiet machine inside the central office, emanating “a collection of simply delightful ‘clinking,’ ‘whirring’ and ‘squeak, squeak, squeak’ noises.” Working like a game of Snakes and Ladders, the switch used selectors to connect calls, these mechanical arms moving up and down in large banks of contacts. When crossbar switching came on the scene in 1938, panel switches were removed where possible, although some remained working until the mid 1970s. Panel became the first defunct switch in the public switched telephone network.

At this site are archived the marvelous photos of the last functional panel switch: https://web.archive.org/web/20040127154522/http://xy3.com/phone/vintage/panel%201.stm
For a wonderful history of early electronic pioneering, click here for a must read interview with Ray Sears:
http://www.ieee.org/organizations/history_center/oral_histories/transcripts/sears.html (external link)

Ray Strackbein of http://www.strackbein.com adds the following comments to the vacuum discussion:

“On your diagram of the Vacuum Tube, remove the reference to “120 volts” on the filament. Some older tubes used common filaments and cathodes, but a long time ago (certainly before 1950), someone discovered that since filament voltage was usually A.C., having a separate cathode would reduce the amount of 60-cycle hum being amplified by the tube (whether diode, triode, tetrode, or pentode). The filament voltage was usually 6.3 or 12.6 VAC that came off of the filament winding of the same power transformer that used a different winding to supply the system plate voltage to a rectifier (often a 5U4 vacuum tube) to be filtered with electrolytic capacitors to become reasonably pure DC of between about 200 to 500 VDC.”