The following is Part 7 in a series on the history of the telephone, mostly from an American perspective. These pages are researched and written by Tom Farley and the original can be found at privateline.com

In 1925 Western Electric sold its overseas manufacturing plants to a small company with a big name and even bigger ideas: International Telephone and Telegraph. A controversial decision within the Bell System. AT&T sold factories in 11 countries, fearing a United States anti-trust lawsuit. Western kept a minority interest in one foreign company, Northern Electric, in Canada, until 1963.. AT&T would not return officially to the international market until 1977. [Kimberlin]

“Western Electric never controlled Northern Electric (now Nortel) although they owned shares always in a minority position, the most they held was 43.57% in 1929, by 1962 they held .01% and by 1964 they were fully divested. The majority shareholder was the Bell Telephone Company of Canada.” Thanks to Ken Lyons, Curator, Telecommunications Museum Telecommunications Museum,Maison des benevoles retraites, Nortel Retirees Club in Montreal, LaSalle, QC.

ITT’s owners, the curious, conspiratorial Behn brothers, Sosthenes and Hernand, bought Western Electric International for 30 million dollars and renamed it International Standard Electric. Their purchase, backed by J.P. Morgan’s bank, included Western’s large British manufacturer, renamed Standard Telephones and Cable. The Behns agreed not to compete in America against Western Electric, and to be the export agent for AT&T products abroad. AT&T agreed in return not to compete internationally against the Behns. Now equipped with a large manufacturing arm, IT&T spread across the globe, buying and influencing telephone companies (and their governments) on nearly every continent.

In January, 1927, commercial long distance radio-telephone service was introduced between the United States and Great Britain. AT&T and the British Postal Office got it on the air after four years of experimenting. They expanded it later to communicate with Canada, Australia, South Africa, Egypt and Kenya as well as ships at sea. This service had fourteen dedicated channels or frequencies eventually assigned to it. The overseas transmitter was at Rugby, England, and the United States transmitter was at Deal, New Jersey. (According to Bell Labs, but see Kimberlin’s notes here.)[BLR] Nearly thirty years would pass before the first telephone cable was laid under the Atlantic, greatly expanding calling capacity. In the next year The Great Depression began, hitting independent telephone companies hard, including the manufacturer Automatic Electric.

Click here for an excellent discussion (internal link) of British involvement with radio telephone, by Don Kimberlin, and a photograph of the main transmitting tube at Rugby, a ten foot tall, one ton valve. 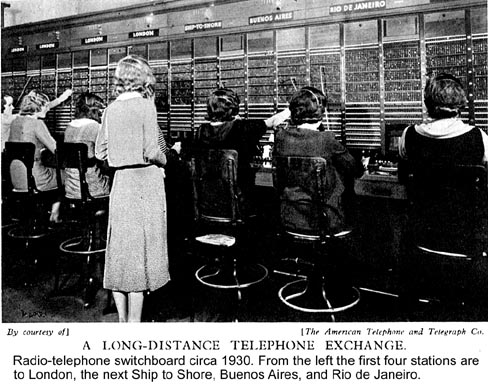 Although telephones had been used in the White House for many years, the instrument did not reach the president’s desk until the Hoover administration at the start of the Great Depression. “In 1929, when the Executive Offices were remodeled the historic one-position switchboard which had served for so many years was retired from service and a new two-position switchboard, especially built to meet the President’s needs, was installed. The number of stations was materially increased in addition to many special circuits for the use of the President. It was at this time a telephone was installed on the President’s desk for the first time.” [Hoover Library]

(Thanks to L. Nickel for researching this point)

The United States Congress created the Federal Communications Commission in 1934 to regulate telephones, radio, and television. It was part of President Roosevelt’s “New Deal” plan to bring America out of the Great Depression. Not content to merely follow congressional dictates, and unfortunately for wireless users, the agency first thought it should promote social change through what it did. To promote the greater good with radio, the F.C.C. gave priority to emergency services, broadcasters, government agencies, utility companies, and other groups it thought served the most people while using the least radio spectrum. This meant few channels for radio-telephones since a single wireless call uses the same bandwidth as an F.M. radio broadcast station; large frequency blocks to serve just a few people.

Treating radio like a public utility, something like the railroads, it was thought a public agency could protect the public against monopoly practices and price gouging. But like many bureaucracies, at every opportunity the FCC tried to enlarge its role and power, eventually aligning itself with large communications companies and then actually working against the consumer. The worst examples were outside of telephony, helping the RCA corporation against F.M. broadcasting, ruining Edwin Armstrong in the process, and favoring RCA over Farnsworth, the first real developer of television, leaving him penniless as well. Along the way were maddening delays in approving technical advances and frequency allocations, something that continues to this day.

Late in 1934 the FCC began investigating AT&T as well as every other telephone company. The FCC issued a ‘Proposed Report’ after four years, in which its commissioner excoriated AT&T for, among other things, unjustifiable prices on basic phone service. The commissioner also urged the government to regulate prices the Bell System paid Western Electric for equipment, indeed, even suggesting AT&T should let other companies bid on Western Electric work. The Bell System countered each point of the FCC’s report in their 1938 Annual Report, however, it was clear the government was now closely looking at whether the Bell System’s structure was good for America. At that time AT&T controlled 83 percent of United States telephones, 91 percent of telephone plant and 98 percent of long distance lines. Only the outbreak of World War II, two and a half months after the final report was issued in 1939, staved off close government scrutiny.

In 1937 Alec Reeves of Britain invented modern digital transmission when he developed Pulse Code Modulation. I say modern because Morse code and its variants are also digital: organized on and off pulses of electrical energy that convey information. While PCM took decades to implement, the advent of digital working was a momentous event and deserves much consideration. David Robertson, a biographer of Reeves, goes so far as to claim Reeves as the father of modern telecommunications. “I think a fair argument can be sustained that the adoption of digital is the principal motor of change in the early 21st century. For sure, there’d have been no merger between AOL and Time Warner and other moves towards combining media with telecom companies had it not become possible to transmit information of all sorts in the same binary way. Whether all this is good news is, of course, another issue.”

For a website devoted to Reeves go here: http://www.quantium.plus.com/ahr/

In 1937 coaxial cable was installed between Toledo, Ohio and South Bend, Indiana. Long distance lines began moving underground, a big change from overhead lines carried on poles. In that same year the first commercial messages using carrier techniques were sent through the coax, based on transmission techniques invented by Lloyd Espenschied and Herman A. Affel. Multiplexing let toll circuits carry several calls over one cable simultaneously. It was so successful that by the mid 1950s seventy nine percent of Bell’s inter city trunks were multiplexed. The technology eventually moved into the local network, improving to the point where it could carry 13,000 channels at once.

In 1938 retractile, spring, or spiral cords were introduced into the Bell System. A single cotton bundle containing the handset’s four wires were fashioned into a spiral. This reduced the twisting and curling of conventional flat or braided cords. Spiral cords were popular immediately. AT&T’s Events in Telecommunication History [ETH] reported that introduction began in April, with Western Electric providing 6,000 cords by November. Still, even with W.E. then producing 1,000 cords a week, the cords could not be kept in stock.

In 1938 the Bell System introduced crossbar switching to the central office, a system as excellent as the panel switch was questionable. The first No. 1 crossbar was cut into service at the Troy Avenue central office in Brooklyn, New York on February 13th.This culminated a trial begun in October 1937. [ETH]A detail of a crossbar switch is shown on the right. Western Electric’s models earned a worldwide reputation for ruggedness and flexibility. AT&T improved on work done by the brilliant Swedish engineer Gotthilf Ansgarius Betulander. They even sent a team to Sweden to look at his crossbar switch. Installed by the hundreds in medium to large cities, crossbar technology advanced in development and popularity until 1978, when over 28 million Bell system lines were connected to one. That compares to panel switching lines which peaked in 1958 at 3,838,000 and step by step lines peaking in 1973 at 24,440,000.

Much telephone progress slowed as World War II began. But one major accomplishment was directly related to it. On May 1, 1943 the longest open wire communication line in the world began operating between Edmonton, Alberta and Fairbanks, Alaska. Built alongside the newly constructed Alaskan Highway, the line was 1500 miles long, used 95,000 poles and featured 23 manned repeater stations. Fearing its radio and submarine cable communications to Alaska might be intercepted by the Japanese, the United States built the line to provide a more secure communication link from Alaska to the United States.

A little bit on radar development in World War II

Back to crossbar. Note the watch-like complexity in the diagram. Current moving through the switch moved these electro-mechanical relays back and forth, depending on the dial pulses received. Despite its beauty, these switches were bulky, complicated and costly. The next invention we look at would in time sweep all manual and electro-mechanical switching away.

[BLR] “The Opening of Transatlantic Service on Shortwaves” 6 Bell Laboratories Record 1928: 405 (back to text)

[Kimberlin] “While AT&T purported to stay out of international markets, they always had an entity with several names like “Bell International” that functioned as sales offices to those who would inquire. No special modifications done, even for AC power. You take it the way we make it if you want it, was the slogan. To that extent, many of the overseas HF radio-telephone points we worked from ATT’s Fort Lauderdale office had Western Electric HF radios and terminals that matched ours. There are many more stories like this . . .” Don Kimberlin (internal link to Don’s page at this site).