The following is Part 8 in a series on the history of the telephone, mostly from an American perspective. These pages are researched and written by Tom Farley and the original can be found at privateline.com

On July 1, 1948 the Bell System unveiled the transistor, a joint invention of Bell Laboratories scientists William Shockley, John Bardeen, and Walter Brattain. It would revolutionize every aspect of the telephone industry and all of communications. One engineer remarked, “Asking us to predict what transistors will do is like asking the man who first put wheels on an ox cart to foresee the automobile, the wristwatch, or the high speed generator.” Others were less restrained.

In 1954, recently retired Chief of Engineering for AT&T, Dr. Harold Osborne, predicted, “Let us say that in the ultimate, whenever a baby is born anywhere in the world, he is given at birth a number which will be his telephone number for life. As soon as he can talk, he is given a watchlike device with 10 little buttons on one side and a screen on the other. Thus equipped, at any time when he wishes to talk with anyone in the world, he will pull out the device and punch on the keys the number of his friend. Then turning the device over, he will hear the voice of his friend and see his face on the screen, in color and in three dimensions. If he does not see and hear him he will know that the friend is dead.” [Conly]Sheesh. 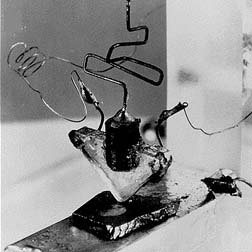 The first transistor looking as crude, perhaps, as the first telephone. The point contact transistor pictured here is now obsolete.

Capitalizing on a flowing stream of electrons, along with the special characteristics of silicon and germanium, the transistor was built into amplifiers and switching equipment. Hearing aids, radios, phonographs, computers, electronic telephone switching equipment, satellites and moon rockets would all be improved or made possible because of the transistor. Let’s depart again from the narrative to see how a transistor works.

Transistor stands for transit resistor, the temporary name, now permanent, that the inventors gave it. These semiconductors control the electrical current flowing between two terminals by applying voltage to a third terminal. You now have a minature switch, presenting either a freeway to electrons or a brick wall to them, depending on whether a signal voltage exists. Bulky mechanical relays that used to switch calls, like the crossbar shown above, could now be replaced with transistors. There’s more.

Transistors amplify when built into a proper circuit. A weak signal can be boosted tremendously. Let’s say you have ten watts flowing into one side of the transistor. Your current stops because silicon normally isn’t a good conductor. You now introduce a signal into the middle of the transistor, say, at one watt. That changes the transistor’s internal crystalline structure, causing the silicon to go from an insulator to a conductor. It now allows the larger current to go through, picking up your weak signal along the way, impressing it on the larger voltage. Your one watt signal is now a ten watt signal.

Transistors use the properties of semi-conductors, seemingly innocuous materials like geranium and now mostly silicon. Materials like silver and copper conduct electricity well. Rubber and porcelain conduct electricity poorly. The difference between electrical conductors and insulators is their molecular structure, the stuff that makes them up. Weight, size, or shape doesn’t matter, it’s how tightly the material holds on to its electrons, preventing them from freely flowing through its atoms.

Silicon by itself is an ordinary element, a common part of sand. If you introduce impurities like arsenic or boron, though, you can turn it into a conductor with the right electrical charge. Selectively placing precise impurities into a silicon chip produces an electronic circuit. It’s like making a magnetically polarized, multi-layered chemical cake. Vary the ingredients or elements and you can make up many kinds of cakes or transistors. And each will taste or operate a little differently.

As I’ve just hinted, there are many kinds of transistors, just as there are many different kinds of tubes. It’s the triode’s solid state equivalent: the field effect transistor or FET. The FET we’ll look at goes by an intimidating name, MOSFET for Metal Oxide Semiconductor Field Effect Transistor. Whew! That’s a big name but it describes what it does: a metal topped device working by a phenomenon called a field effect.

A silicon chip makes up the FET. Three separate wires are welded into different parts. These electrode wires conduct electricity. The source wire takes current in and the drain wire takes current out. A third wire is wired into the top. In our example the silicon wafer is positively charged. Further, the manufacturer makes the areas holding the source and drain negative. These two negative areas are thus surrounded by a positive.

Now we introduce our weak signal current, say a telephone call that needs amplifying. The circuit is so arranged that its current is positive. It goes into the gate where it pushes against the positive charge of the silicon chip. That’s like two positive magnets pushing against each other. If you’ve ever tried to hold two like magnets together you know it’s hard to do — there’s always a space between them. Similarly, a signal voltage pushing against the chip’s positive charge gives space to let the current go from the source to the drain. It picks up the signal along the way.

The Internet Archive has stored a great transistor tutorial here:

Check out this from Lucent’s excellent site:

As Louis Bloomfield of Virginia puts it:”The MOSFET goes from being an insulating device when there is no charge on the gate to a conductor when there is charge on the gate! This property allows MOSFETs to amplify signals and control the movements of electric charge, which is why MOSFETs are so useful in electronic devices such as stereos, televisions, and computers.”

I know that this is a simple explanation to a forbiddingly difficult topic, but I think it’s enough for a history article. Thanks to Australia’s John Wong for help with his section.