The Long Lines division of AT&T was considered to be the “long distance” company that connected the regional Bell companies and independent telephone companies alike. This was the infrastructure that existed from the beginnings of the telephone to the “breakup” (divestiture) of AT&T in 1984. Following divestiture, Long Lines continued as the core of AT&T until it was purchased by Southwestern Bell in 2005 and became the “new” AT&T as we know it now.

Source for most of this came from a blog post from Garrett Fuller “AT&T Long Lines, A forgotten Tale” with some minor corrections and other notes added by Telephone World.

AT&T Long Lines – Long Distance Made Possible For The Masses 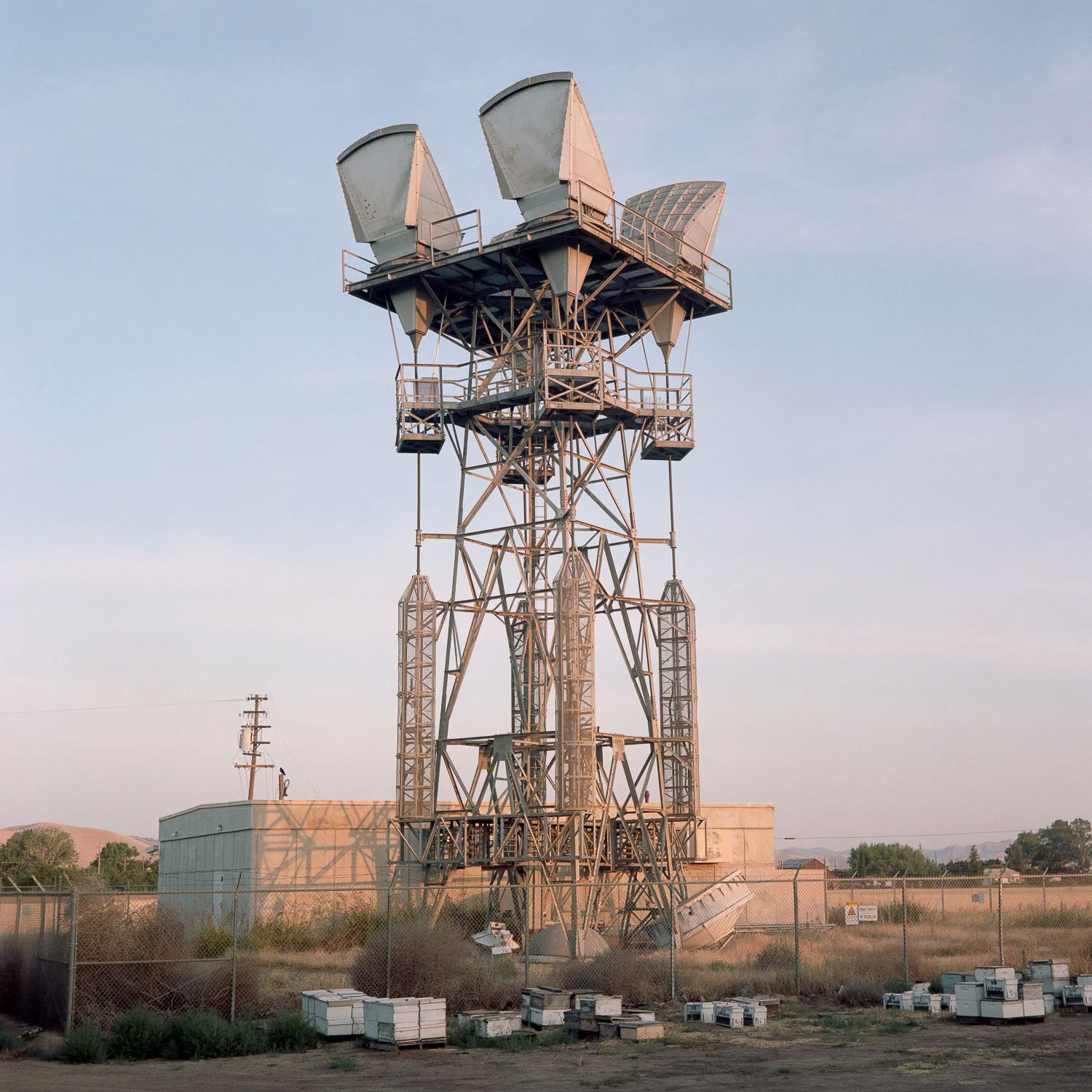 The era spawning from the 1950s throughout the 1980s can be considered the golden era of telecommunication. While computers were expanding from items consuming entire rooms to something that could fit on a person’s desk, so was the way we communicate. Televisions went from being a luxury item to being in every home. Telephone systems were not only used for voice, but to transfer data from one location to another almost instantaneously. The inventions that were used during this time period are all obsolete, but it’s often forgotten how we’ve arrived where we are.

The AT&T Long Lines system is one of the systems that transformed communication systems but is nearly forgotten about. Without relying on vulnerable, expensive, and high-maintenance wired systems in a time where satellite communications and fiber optics did not exist, the Long Lines system allowed people to connect from all over the country.

The History of the Long Lines System

Throughout the hey-days of telephone and telegraph systems, wired systems were the only option. Long lines of coaxial cable connected cities together, although this system presented major issues. The first was vulnerability. Much like power lines and present above-ground cable systems, a tree limb or storm could easily knock down the cables. This isn’t a major problem when ten or twenty people are affected, but when hundreds of thousands of people are affected – including vital operations, it grows into a catastrophe.

The second issue is the wired systems were expensive to setup and required lots of maintenance. Miles and miles of thick cable isn’t cheap, and isn’t cheap or easy to install or repair when it was damaged. (We’re talking about an era predating “self-diagnostic” systems that would automatically alert the telephone company where a break had happened.)

AT&T – a part of the Bell System – got a smart idea to replace these lines with something more reliable: a network of relay towers that worked on microwave frequency.

The first coast-to-coast automated telephone call (DDD or Direct Distance Dial) was made on August 17, 1951 using the microwave telephone system that Long Lines created – sometimes known as the “Skyway” or “Telephone Skyway” – network.

The system grew from it’s initial opening in 1951. Not only in the size of the network but the way it was used. The Long Lines network was used to carry television signals, such as network television shows and news, as well as important military data. Computers would later utilize the network to transmit data from coast-to-coast with the advance of teleprocessing systems and modems. 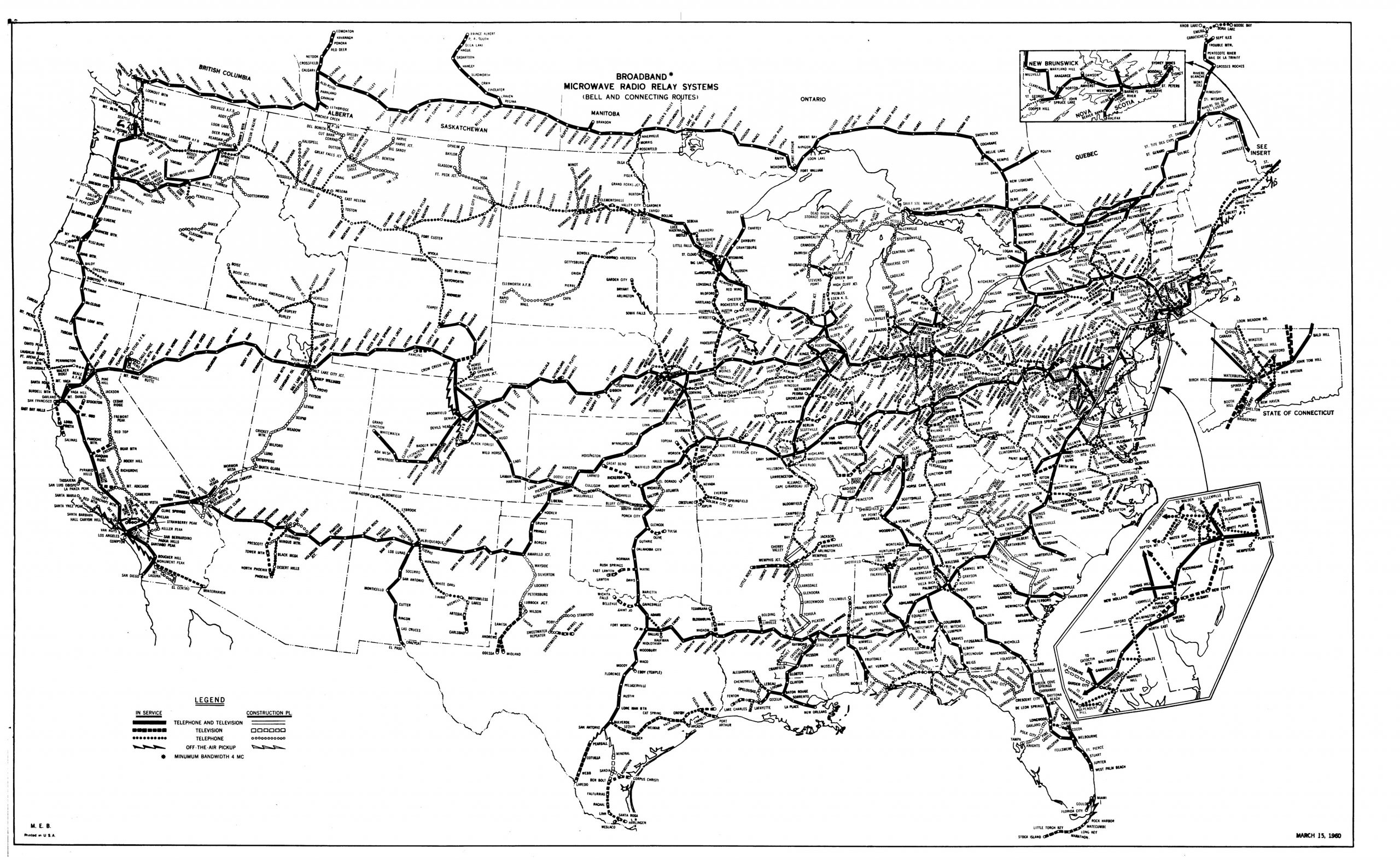 A 1960 map of the broadcast lines connecting the stations. (Source: Long-Lines.net)

The microwave towers were connected via line-of-sight horn antennas which transmitted and received microwave signals. A call placed in one part of the country would be passed on to the next relay station, then passed on to the next, and so on until it reached the station nearest its destination. Then it would be sent through cables to the telephone company then to your house. Each horn antenna was positioned so it made a direct path (line-of-sight path, or “as the eagle flies” path) to the next station.

Remember that I mentioned television? The towers were not only used to relay the transmission of telephone calls, but also television shows. NBC, CBS, and other networks used this to air their shows and news networks all around the country. Many shows, both live and pre-recorded, were sent over these microwave towers. The first example of a live show was used in 1951 to show Edward Murrow’s See It Now.

During the height of the Cold War, the importance of the Long Line towers grew. Military phone calls and data were transmitted through the towers. Many towers had their base stations installed underground in shielded rooms that were tested to withstand the EMP produced by a nuclear blast. These underground stations also were equipped with the same toiletries and survival kits and items that many Fallout Shelters had.

The towers themselves, with the horn antennas, were also designed to withstand a nuclear detonation. Some above-ground stations also were designed with sophisticated systems to keep the network online in the event of an attack.

All of the equipment – including the horn antennas, the towers themselves, the transmission equipment, and the diesel backup generators – were all designed and made by Western Electric. (Which, if you can remember, helped IBM on some aspects of the SAGE system, which dates from the same era.)

IBM had even used the system for confidential purposes in Kingston, New York.
New Discoveries and post-Monopoly Decline

During the 1970s, technological breakthroughs eventually would spell the end for the Long Lines system.

One of the new innovations was the use of fiber optics. Fiber optic lines are typically located underground, eliminating the vulnerabilities of earlier coaxial-based cable systems. Fiber optics also were much faster than coaxial-cable as fiber optic systems utilize light to transmit data through strands of transparent material that conduct the light, acting as a waveguide.

The second innovation was the use of satellites themselves. Television programs could be relayed using satellites which orbited in our upper atmosphere, which allowed for widespread and nearly-instantaneous relays that required minimal equipment. And since the relaying equipment wasn’t on the ground in the middle of a corn field in Missouri, it was less prone to damaging storms and vandalism.

But these innovations came at a time where AT&T – or the Bell system – was feeling the effects of poor business practices. The Department of Justice was hot on their case and eager to enforce antitrust suits against the company. The Bell system had developed a huge monopoly which allowed them to charge whatever they wanted for telephone lines.
The Bell System, also known as “Ma Bell”, operated a giant monopoly in the American telephone market. This allowed the company to charge extremely high prices for telephone service.

In 1984, the Department of Justice broke up AT&T – one of the largest monopolies ever created – to many, smaller telephone companies nicknamed “Baby Bells.” These “Baby Bells”, like Southwestern Bell and Bell Atlantic, would eventually evolve into many well known telecommunications company of today, like Verizon, CenturyLink, and (the modern) AT&T.

The Impact of the Long Lines System

Post-break up AT&T was not a small company for long. They eventually regained power by becoming one of the “big three” wireless (cell phone) carriers. Once again, towers (although this time connecting cell phones) have been constructed around the nation, sometimes even in rural areas.
This Long Lines center, located on the roof of a present-day AT&T office, reminds how the towers still remain standing despite being out of use for decades. (Photo: Spencer Harding)

Many of the Long Line towers remain as a reminder of how far we’ve come in the world of telecommunications. We have went from party lines and operators (“Betty, can you connect me to Mr. Smith’s office?”) to holding a telephone and computer – combined – in our own hand. We don’t need to stand by the phone to make a call or wait for one – we can do it all from hour hands, from virtually anywhere.

The towers can also be used to remind you of the Cold War. Just like old airplanes, nuclear missile silos, or SAGE, the Long Lines system was one of the first lines of defense during a time where we were constantly under threat.

As for the towers themselves – some have been reduced to scrap, some lay abandoned, others have been re-purposed. All of the Long Line towers I’ve seen in person (like the Slater station) have sat abandoned since the early 1990s. The base stations are surrounded by weeds and trash, while the horns have been weathered and damaged. Some of the stations have had their horn antennas entirely removed. One near where I currently live has been stripped of all its horn antennas, leaving just a flat platform with four holes where the horn antennas and their waveguides would have once went. According to Google Maps the Slater station has seen a familiar fate – having its horns removed since I last drove by that station nearly ten years ago.

Other stations have seen a new lease on life. After AT&T sold many of the antennas to companies in the late 1990s, many have been re-purposed for other purposes. Many have been turned into ham radio stations, with the tower serving as a giant ham radio antenna. Others, mostly owned by one company (American Tower), have been leased to cell carriers (like AT&T and Sprint) to be fitted with cell phone relay equipment.