Here are some pictures and descriptions of some vintage pay phones. If you are under the age of 50, you may have never seen a “Three-Slot” pay phone in actual use. Come back in our time machine to see what pay phones used to be like.

(This section is a work in progress.)

This is an example of a Western Electric three-slot pay phone. Three-slot pay phones like these were used by Western Electric (Bell System) from the 1940’s through the 1970’s. They had a coin slot for each of 3 kinds of coins – Nickel, Dime and Quarter. When you inserted a coin, it either rang a special bell or gong to signal the operator what kind of coin it was. A nickel was one ‘ding’, a dime was two ‘dings’, while a quarter was a ‘gong’ sound. For local calls, depositing a set amount of money (as determined by internal phone wiring by the phone company) completed a ‘ground loop’ to the local telephone company central switching equipment. The coin return hopper flipped down allowing you to recover returned coins. Phones were commonly made in black or ivory (as shown here). 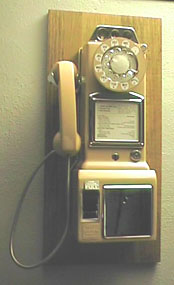 This is a close-up of the same phone. Notice the three coin slots are clearly marked. The coin return is on the upper right side of the dial. 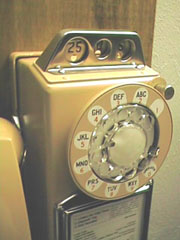