The COCOT pay phone (Customer Owned Coin Operated Telephone) is a result of the divestiture of AT&T in 1984, thereby bringing competition to the telephone industry in many areas. Pay phones were part of this competition and shortly after divestiture, there were many companies that jumped on the bandwagon to make these “fake'” pay phones and cash in. COCOTs are not limited to the USA as they are now found in Canada and other countries where the telephone company monopolies are being divested.

The COCOT pay phone is different than the regular telephone company (telco) pay phone since it must do all the rate information and “billing” for dialed direct (non-operator assisted/calling card calls) inside the phone rather than relying on the telco switch to do it all. This is accomplished by a built-in computer – which handles all customer-interface by a LCD screen (sometimes even an LED screen) and voice-synthesizers.

COCOT providers can check and/or change the settings on the phone remotely. The phone itself contains a special computer modem inside where the COCOT provider can dial it up and access the internal computer of the COCOT.

There many examples of COCOT phones used in the USA and Canada. Some of these are old traditional telephone company type pay phone housings (WECO Fortress, AE/GTE Fortress, Nortel Centurion, etc) with new electronics inside. Others are copies of the WECO Fortress, and still others are of original design. 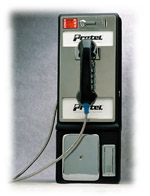 They also make other kinds of pay phones and the electronics to retrofit payphones to make them “smart”. They also make the “Ascension” phone, which looks very much like a Millennium phone (see below).

The Millennium phone is discussed on the Northern Electric / Northern Telecom / Nortel page as they originally developed the phone. 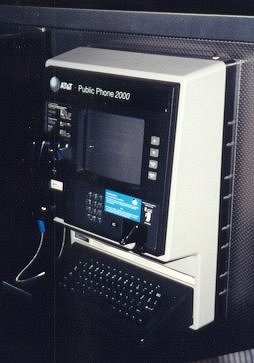 At one time, this was commonly found in airports but no where else as far as I know of. It was designed to be an all-in-one unit for accessing E-mail, faxes, computers, etc. It has a full keyboard for text messaging. It does not take coins, but has a slot for a calling card/credit card.

With the divestiture of AT&T, not only were long distance and pay phones open to competition, but so were operator services. Instead of going through “Ma Bell” to handle the calling card and collect calls, COCOT people discovered if they use AOS services, they could cash in on even more profits.

AOS services handle many of the long-distance operator functions of a telco operator – including collect and calling card calls.

Originally, AOS services were accessed by the COCOT when the customer of the COCOT dials a 0+ number. The phone temporarily stored the number, then dials a special toll free number (1-800 number) in the background to reach the AOS service. When the AOS computer answers, a dial tone is presented and the COCOT dials its own number (a simple form of Automatic Number Identification or ANI) , then it dials 0+ Area Code + number – all using DTMF (touch tone).

Later on, most phones allowed the customer to just dial a toll free number to reach the AOS service, so the phone itself didn’t have to be programmed to do the “magic” described above.

AOS services are independent services that may or may not be related to the COCOT telephone company. AOS companies included OCI and US Long Distance (USLD). These companies charged higher rates than AT&T operator-assisted rates plus a high surcharge for the call itself. Hence these companies have gotten a bad name for ripping off customers.

COCOTS are required by the FCC to let the customer access the carrier of their own choice, usually by the Equal Access codes (101-xxxxx) or by the rarely used 950 codes, or by toll-free (800/888/877/866/855/844) numbers. Many COCOTs are not properly programmed for the 101-xxxxx codes. Be careful when you use these phones if you want to use a carrier that is not the COCOT’s carrier (AOS or regular) that the phone will let you complete the call via the carrier of your choice. Best bet is to use the toll-free number supplied by your long distance company.