GTE (Automatic Electric) made the Model 120 (AE 120) series of “Fortress” (ruggedized single slot style) pay phones from the early 1970s through the mid 1980s. There were three models, the Model 120A, 120B, and 120C. From the outside they looked fairly much alike, but on the inside they were distinctly different.

In 1989, Automatic Electric was sold to AT&T (later Lucent Technologies) to form AG Communication Systems Corporation (AGCS). Around the same time (maybe as early as 1986?) the payphone business was sold to Quadrum. As of January 2021 you can still buy the Model 120C pay phone and phone parts.

Here are some example pictures and technical descriptions of GTE / Automatic Electric / Quadrum Pay Phones. Until recently they were commonly found in both the USA and Canada. They can still be found in parts of British Columbia, Canada as of 2019.

This is an example of a model 120B GTE / Automatic Electric “Fortress” pay phone. It is similar in design in many respects to the Western Electric Fortress pay phone.  Click on the picture to see a larger version. 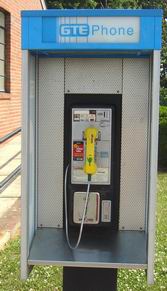 Example AE Model 120B pay phone. Found in Verizon territory that was once GTE

These phones were found extensively in the former GTE telephone territory and were also used by most independent telephone companies in the US. In Canada, they were used in British Colombia since the incumbent telephone company (BCTel, now TELUS) was partly owned by GTE for a number of years.

Notice the coin slot and coin return slots are on the right instead of on the left as on the Western Electric Fortress. These phones were originally designed to be fully Central Office controlled (including ACTS compatibility).

There were both rotary dial and Touch-Tone versions of these phones. Of these there were also Coin First (CF), Dial Tone First (DTF) and Post Pay (PP). Post Pay were mostly used in places with Step by Step switching equipment as they did not have “coin control”. CF and DTF used with both Step by Step (with coin control), Crossbar (North Electric, typically), early electronic switching systems (example: AE 1AEX, 2AEX, etc.), and finally with full digital systems (example: NT DMS-10, DMS-100, etc.)

Here’s an example of a rotary dial version. Some of the rotary dials were made of metal, some were plastic. 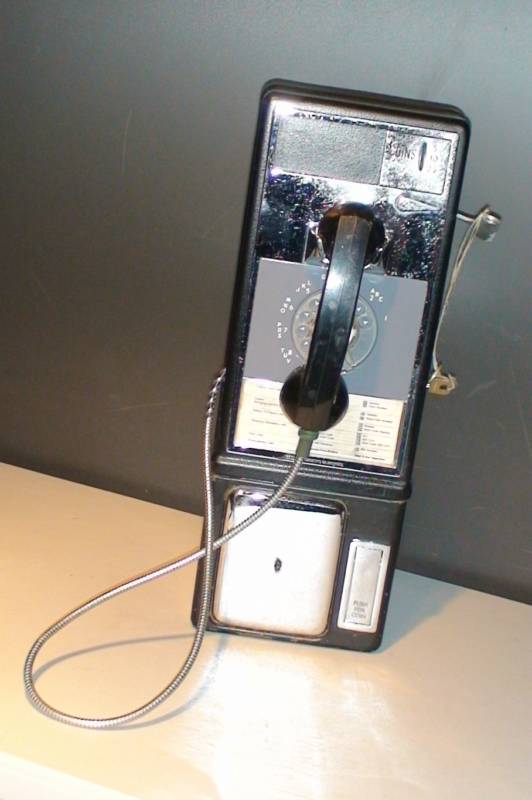 Touch-Tone keypads have several versions depending on the vintage of the phone. The original Model 120A phones had white plastic keys (these were fairly rare). Model 120B phones have recessed rectangular metal keys (left and center pictures). Model 120C pay phones (and retrofitted 120B phones) had regular square metal keys.

Most AE/Quadrum pay phone cases were painted black, though there were some that were painted chrome. I had seen one Model 120A payphone that was painted pink!

Supposedly there was a flush mounted version of the 120 but was rarely seen. (I think the Honolulu airport had some at one time?)

Modifications of the AE Model 120 for COCOT use

Not all pay AE/Quadrum pay phones were created equal! With the “breakup” (divestiture) of the Bell System, this allowed businesses to own their own pay phones. The AE Model 120 series was easily customizable to become a COCOT with the replacement of the electronic boards inside. A number of phone companies also modified their existing pay phones to become COCOTs. Here’s an example of a COCOTized AE Model 120.