Here are some example pictures and technical descriptions of Western Electric Pay Phones that until recently were still found in the USA.

This is an example of a Fortress pay phone. Developed in the 1960’s by Western Electric, it was later maintained by AT&T and then Lucent Technologies. In the end, they were maintained by QuorTech, a COCOT phone manufacturer. This phone improved upon the older three-slot style pay phone on two accounts. The first is that there is only one coin slot. The other is the heavily armored exterior and cord.

The single slot fortress has the ability to be used in an automated system for long distance calls. AT&T used to use a system called Automatic Coin Toll Service and is described on the ACTS page.

The phone had two configurations, stand alone (model 1A1 or 1A2) or behind a metal panel (model 2A1 or 2A2). The panel just hid a regular model 1A1 or 1A2 phone, but it looked cleaner with the flush trim.

Phones made in the 1960s had a tapered coin return lever, later ones had a squared-off end

Older phones made before the 1990’s have mechanical coin return mechanisms (they go “ker-chunk” when you move the lever). More modern electronic ones do not make any noise.

Older phones or phones that have not been modified do not have an “amplification” button and only have a red sign in the corner telling you how to make a call on the phone.

Both rotary dial and touch-tone varieties exist. Most phones are painted black though I have seen some painted dark green.

BellSouth (now AT&T) had converted all of their phones to COCOTs by the late 1990s. Bell Atlantic (now Verizon) used COCOTs where they were contracted to install them outside of their landline territory.

Like most pay phones, they have either been removed from service or are disconnected and retired in place.

Though the Charge-A-Call phone does not take coins, it still qualifies as a Pay Phone since it is used beside other pay phones and works with primarily the same technology. 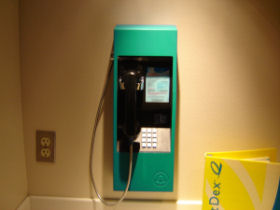 The Charge-A-Call phone (Model 10A) was Bell/Western Electric’s answer to making a cheap pay phone where people would only make calling card or other operator-assisted calls (collect, 3rd number, etc). These phones were invented in 1978 and made until AT&T’s divestiture in 1984. All of these phones are blue. Only touch-tone style phones were made. The phones made for Bell companies are embossed with a 1970’s Bell logo on the bottom of the body (as this picture shows) while ones made for independents do not have an embossed logo. 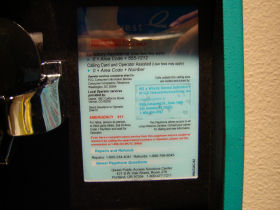 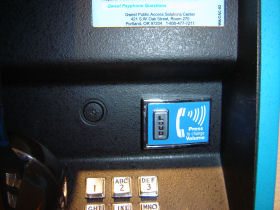 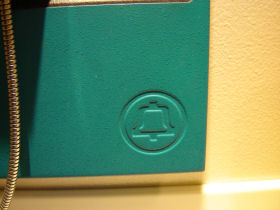 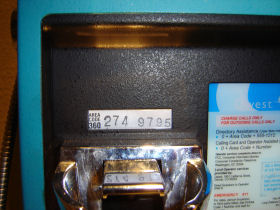 The actual phone itself was a “dumb” phone, much like any central office controlled pay phone. It didn’t have any “smarts” like a COCOT. It always depended on the telephone network behind it. The line was restricted to only made toll free calls or calls to TSPS/OSPS with 0+ dialing.

Unfortunately, this phone never really caught on as Bell had hoped. One thing was at the time the phone was made, people still primarily made coin calls. Another problem was that the phone did not look like a standard phone and scared away potential users.

Like most pay phones, they have either been removed from service or are disconnected and retired in place.