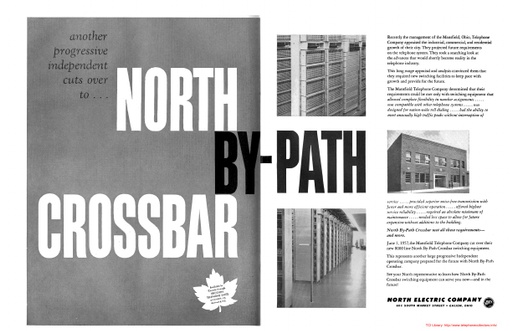 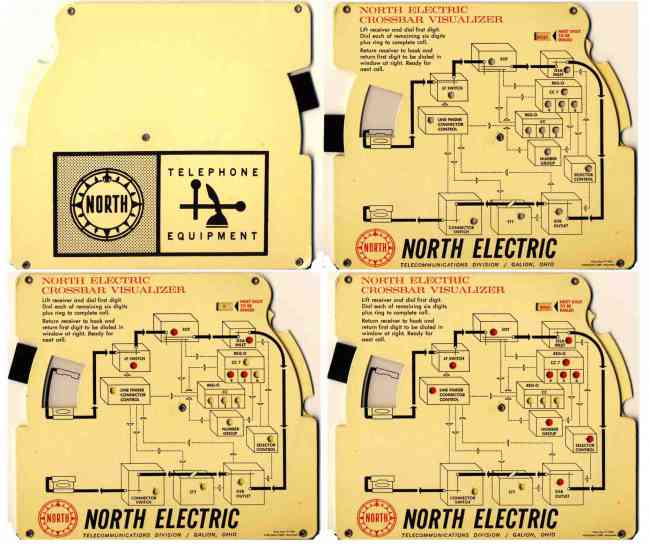 [Telephone World wishes to thank a retired telephone employee who contributed to this article.]

NX-1 was an Americanized version of a LM Ericsson (Sweden) Crossbar system. North Electric (Galion, OH) manufactured this switch starting in the late 1950’s. North called it NX-1 BY-Path Crossbar, referring to the fact that the call progress was established using (by the path) the “future” talk path. Line groups had a capacity of 500 lines. The system had one or more Line groups of lines in groups of 25 lines (if I remember correctly) per module. Each module had a crossbar switch providing inlets and outlets to those lines. The crossbar switch provided outlets from the customer line via Subscriber Originating Trunks (SOT) to REG-Os (Registers – outgoing) which accepted and translated the dialed digits and then “code sent” the routing information to the Group Selector’s control marker (Unlike WE and other XBar systems, there was not a common marker) .

Code sending used +48 -48, open and Ground combinations of two (over the tip & ring) to pass the route code (received by the REG-O from the number group (NG) translator for local number terminations) or (the decoded trunk route which was strapped in the registers). Interestingly this system of coding sent digits was first used in the North Automanual System developed by North using patents from the inventor Edward Clements.

The Group Selector (GS) (original version) had two switching stages and presented outlets to the Subscriber Terminating Trunks (STT) of the local Line Group(s) or outgoing trunks (depending on the dialed call). When a switch outgrew the number of outlets presented by a 2-stage GS, some outlets would be tandemed to another 2-stage GS which expanded the number of outlets available. This concept was called double GS. Later North introduced a three stage GS which provided considerably more outlets than 2-stage systems and eliminated the inefficiency of double trunking. Outbound trunking could either be pulse or MF so when calls trunked to a step office, the NX-1 sender had to outpulse the 3-7 digits necessary to switch the call through that stepper (hence the long pause after dialing before ringback in some calls).

The NX-1 A was the first version and had essentially Ericcson circuits (REG-K) and a lot of LME manufactured crossbar switches! The first switch went into Seymour, IN in 1956. I believe either switch 2 or 3 was Winter Park, FL and switch # 5 went into Live Oak, FL in late 1958.

Improvements and elimination of the REG-K occurred with the NX-1 B and finally the general production versions NX-1C/D. The first NX-1s used a neon tube decoder matrix based number translator. Interestingly, once the tubes had aged, they became light sensitive and did not always fire when there was no external excitation to bias them. The result was that when the staff left for the night and turned off the lights, the number group translator would begin to fail with no particular pattern! The solution, a fluorescent light over the NG with NO off switch!

In the 1960’s North introduced an improved NG based on magnetic sense coils which detected a pulse through a single wire threaded through combinations of these coils to indicate the line group and line number of the dialed number. Each NG translated 1000 numbers. A similar version of this concept was built in two other configurations used for number translations in the NX-2, NX-2A and UN-2 small crossbar switches. (but that is another story)

North’s first electronic switch the NX-1E (domestic version) was essentially the same line and group selector equipment with a computer handling most of the functions of the registers , senders and translators. There were two versions of the processor pairs, First the Omni- 3 and later the Omni-4. Both were originally developed by North for special switching systems manufactured for military applications. The Omni-3 had a 32K magnetic core memory and I believe the Omni-4 expanded to 64K! While this was not true Stored Program Control, it was a big step forward in simplifying translations and digit manipulation beyond what could be done with the EM registers and senders. It also provided integrated toll ticketing and the ability to offer basic calling services such as three way calling, call waiting and such. Even so, the call progress through the switch was still handled the same as with prior version of the NX-1, that is the call information from the translated call was still code sent to the Group Selector which then set up the outgoing call path. The processors did not control the setup call path, nor did they map the conversation path in their memory they simply interpreted the digits dialed, translated local and LD calls, and passed routing and outbound digits for trunked calls!

In addition to the local NX-1E, North also made a four-wire toll switch using the Omni’s which was called the NTS4E, not to be confused with the larger ETS-4 toll switch which North built a (very) few of using the LME Code-switch. One of the first of the NTS4E 4-wire North crossbar switches was installed at Live Oak, FL in 1976 and married to the existing NX-1 creating a hybrid 2-wire & 4-wire class 4/5 switch with all routing and translations for both sides performed by the Omni-3 processors!