Crossbar telephone switching systems were developed by LM Ericsson of Sweden in the 1930s. Ericsson switches were very popular in Europe, especially in the United Kingdom.

Western Electric (aka the Bell System) obtained licenses from Ericsson to develop their own crossbar switches. The Crossbar switch had a significant advantage over either Panel or Step by Step since it was able to use a “store and forward” concept where it would take incoming digits, store them, and then process the call. It was also able to do call routing and determine where a call should be sent to by doing “translations” of the incoming digits and deciding how to send the call.

The first Western Electric developed crossbar switch was the #1 Crossbar (#1XB for short). The #1 Crossbar was designed for use in large metropolitan areas such as New York City, Chicago, Pittsburgh, Boston, Washington DC, and the like. Often times the #1 Crossbar was used in conjunction with existing Panel switches in the same building. The first installation of a #1 Crossbar was in 1938 at the Troy Avenue central office in Brooklyn, NY.

There is a working example of a #1XB switch at the Connections Museum in Seattle, Washington. It would be difficult to describe them in text, so I will let these YouTube videos do that instead.

The #5XB was also significant since it was was the first switch to utilize (with modified originating registers) to handle customer dialed Dual Tone Multi-Frequency (DTMF, aka “Touch Tone”) dialing in the early 1962. 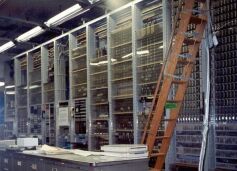 The first Western Electric tandem crossbar switch was known as the “Crossbar Tandem” or XBT for short. The XBT was developed in 1941 based upon the existing #1 Crossbar local central office switch. The XBT was meant for use as a regional or city-wide tandem switch, though in the early days XBT switches were often uses a long-haul tandem switches. There were many XBT switches used throughout the United States and Canada (developed under license by Northern Electric).

By the early 1940s, Western Electric realized that the XBT was not enough to handle the many long distance calls that were placed daily. A much more robust switch needed to be developed.

By 1950, Western Electric had anticipated the need for the #4 Crossbar to change “routing translations” dynamically when needed, instead of being hard wired. New #4 Crossbar switches were called #A4A for “Anticipated #4 Advanced”. These machines were installed between 1950 and 1953.

By 1953, a “card translator” system had been developed using punched metal cards and light detecting “photo cells” would detect patterns in these punched cards to determining routing translations and alternate routing translations (if the first routing was busy). The new #4 Crossbar switches were called #4A (#4 Advanced). The existing #4 Crossbar switches were modified for use with the card translator – their names became #4M (#4 Modified). The #4A switches were installed between 1953 and 1968.

The #4 Crossbar series of switches were in service until the 1980s when they were replaced with the #4ESS series of digital tandem switches. 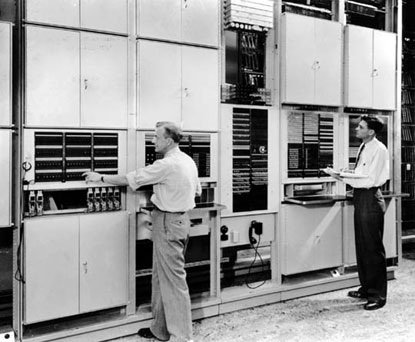