The following is Part 10 in a series on the history of the telephone, mostly from an American perspective. These pages are researched and written by Tom Farley and the original can be found at privateline.com

In June 1968 the FCC allowed non Bell equipment to be legally attached to Bell System lines. Despite restrictions the Bell System would impose on such equipment, many companies started producing products to compete with Western Electric. In 1969 Microwave Communications International began transmitting business calls over their own private network between Saint Louis and Chicago. Bypassing Bell System lines, MCI offered cheaper prices. AT&T bitterly opposed this specialized common carrier service, protesting that Bell System’s long distance rates were higher since they subsidized local phone service around the country. Still, MCI was a minor threat, economically. The real problem started a few years later when MCI tried to connect to the Bell System network.

At the end of the 1960s AT&T began experiencing severe customer service problems, especially in New York City. The reasons were many but most had to do with unforeseen demand, coupled with reduced maintenance. The Bell System fixed the problems but not without an attitude that embittered people by the millions. In Boettinger’s pro-Bell System history, he recounts the troubles this way: “In 1969, unprecedented jumps in usage and demand caused service deterioration in several large cities. Huge and rapid injections of equipment and personnel trained in accelerated programs were required before quality levels were restored. The experience showed how vital telephones had become to modern life (when even persons on welfare were felt to need a phone) and how frustrations with breakdown led to aggressive behavior.” That the Bell System didn’t understand how vital telephones were to everyday living is beyond understanding; that welfare recipients weren’t thought to deserve a phone is beyond acceptance, however, Ma Bell was not alone in dealing with dissatisfied customers. GTE also had problems.

GTE and Automatic Electric went through tremendous growth in the 1960s, with A.E. expanding to four different facilities. In 1969 their California facility in San Carlos made transmission equipment. Switchgear and related equipment came from Northlake and Genoa, Illinois, and telephones and other customer apparatus came from Huntsville, Alabama. Automatic Electric Limited in Canada also produced equipment. A.E.’s research in the 1960s resulted in their first computerized switch being cut into service into Saint Petersburg, Florida in September 1972. It was called the No. 1 EAX (Electronic Automatic Exchange). Growth wasn’t handled well, though, by their parent company, General Telephone and Electronics.

GTE was then a poorly managed conglomerate of 23 regional phone companies and a maker of, among other things, televisions and light bulbs. They had their successes and failures. One notable achievement is below. 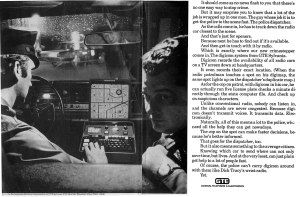 “Introducing a crimestopper so advanced Dick Tracy doesn’t have it yet.” Click on image to enlarge.

In1971 General Telephone and Electronics (GTE Sylvania) introduced a data system called Digicom. It let dispatchers identifying patrol car locations on a screen, and allowed officers to run license plate checks. When a patrolman touched a spot on the digicom screen it lit up the same spot on the dispatcher’s map. Produced by their Sociosystems Products Organization, I do not know how many units were actually installed by GTE, but it certainly foreshadowed later developments. Today many police departments use cellular digital packet data (CDPD) to run plates and communicate in text with their dispatchers. CDPD runs on existing cellular networks, with data rates no more that 9.6 or 19.2 Kbs, adequate for most purposes but slow when you consider that in the year 2000, 29 years after this system was introduced, we are still laboring with creeping data rates. Click on the image above or here to get the full picture.

GTE had their problems as well, especially with customer service, getting worse and worse through the late sixties, with the company admitting their problems by conducting a highly unusual national magazine ad campaign in November, 1971. The ad in the National Geographic read:

“A lot of people have been shooting at the telephone companies these days. And, in truth, we’ve had our hands full keeping up with the zooming demand for increased phone service. But General Telephone and, in all fairness, the other phone companies haven’t been sitting around counting dimes. For some time now, we’ve been paying a healthy ‘phone bill’ ourselves trying to make our service do everything you expect of it . . . During the next five years we’ll be spending over $6 billion upgrading and expanding every phase of our phone operation . . . Ladies and gentlemen, we’re working as fast as brains, manpower and money can combine to make our service as efficient as possible.”

And although GTE might not have “sat around counting dimes,” GTE’s poor service record continued, a reputation that haunts it to this day. Rightly or wrongly, the phone companies, particularly those in the Bell System, watched agog as customer relations got worse. Hacking and toll fraud increased dramatically, as the phone company became fair game, a soulless and uncaring monster to war against. Attacking Ma Bell became common and almost fashionable.

In 1974 the Justice Department began investigating AT&T again for violating antitrust laws. They recommended Western Electric and Long Lines be divested from AT&T. Many people in Justice as well as throughout the country were concerned with the size of AT&T and their monopoly status. Although everyone knew the Bell System provided the best telephone service in the world, it had done so with little or no competition. AT&T’s assets stood at 75 billion dollars. Big was not good in the early 1970s, with anti-establishment (particularly the military industrial establishment) feeling running high during the Vietnam and Watergate era. Contributing to the Bell System’s woes, in July, 1977 the FCC instituted a certification program, whereby any telephone equipment meeting standards could be connected to Bell System’s lines. Dozens and then hundreds of manufacturers started competing with Western Electric, making everything from answering machines, modems, fax machines, speakerphones, to differently styled telephones.

During the 1950s, 1960s, and 1970s, Stromberg-Carlson of Rochester, New York and then Lake Mary, Florida, produced a marvelously simple switch known as the X-Y. While an independent phone maker at the turn of the century, Stromberg-Carlson had by the early 70s been acquired by General Dyanmics. They were later bought by Rolm and then by Siemens of Germany, who still owns it today. It’s new name is Siemens-Stromberg. But back to their switch.

Little known outside the industry, the Stromberg-Carlson X-Y step by step switch solidly competed for business against Strowger technology (manufactured by Automatic Electric and others) in thousands of installations throughout rural America. Some may remain in Mexico and South America. Although the Bell System and many independents preferred the Strowger design for small communities, many telephone companies did not. Strowger equipment often worked reliably for decades but it was more complicated than X-Ys and it required a great deal of preventative maintenance performed by skilled craft workers. Ray Strackbein, who used to work for Stromberg-Carlson, says that X-Ys, by comparison, needed few repairs and fixes were simple. He writes, “I once met a husband-and-wife team that traveled throughout the Great Plains in their Winnebago motor home on a yearly cycle and routined hundreds of X-Y offices each year. They would work Arizona, New Mexico, and Texas in the winter, and Montana, Wyoming, and North Dakota in the summer. Even a Switchman who could not figure out how to wire a doorbell for a central office could maintain a C.O. full of X-Y switches.”

Ray then goes on to describe the Stromberg-Carlson X-Y step by step switch, which could be configured or enlarged in blocks of 100 lines:

“Describing it is rough, but it was a modular switch that was horizontally slid into a vertical bay of shelves. An array of 400 (10X10X4) bare copper wires ran vertically behind the switch for the whole length of the bay. Four circuits were needed to make a connection: Tip, Ring, Sleeve, and Helper Sleeve.

Each switch sat on shelf about 12″X9″X2″ (2″ high). When someone dialed a number, the retracted switch moved horizontally — the X direction — (left-to-right as you faced it from the front), one step for each dial-pulse. Then when the dialed digit stopped pulsing, the switch rapidly extended horizontally away from you as you faced it, with four contacts, one for each circuit — T, R, S, and HS — sampling the 10 possible phone trunks for an idle trunk to the next selector.

The design of the X-Y switch was brilliant. Unlike the Strowger that lifted the armature for each dial pulse then rotating through a half-circle to find an idle line, the X-Y switch lifted no weight. The moving switch rested on the plate and moved only horizontally. This made for a switch of a much more simple design than the Strowger.” [Strackbein]

As switches were going digital, so, too, were nearly all electronics in the telecommunication field. Still, a few technological holdouts remained, as the Bell System replaced their last local cord switchboard in 1978, on Santa Catalina Island near the coast of Los Angeles, California. That’s right, operators still placing calls by hand in the Age of Disco. “[T]he smallest version of Western’s 160 toll switchboard” was replaced by a 3ESS, the first Bell switch, incidentally, to be shipped by barge. The city served would have been Avalon. This according according to the June, 1978 Bell Laboratories Record and personal correspondence with P. Egly of Santa Rosa, California.

Egly relates the following about Avalon:

“Tom, Avalon had its own inward operator and I even remember the route, 213 + 012 +… Calls off the island were handled by the same operator using She surely dialed all calls in the same way that any of the operators in the LA toll centers did. I am not sure if the trunks to the mainland were by microwave or by cable. ”

“[Since this was a manual exchange] There were no dial phones on Avalon, all were manual magneto service with even the payphones having cranks. Most of the private subscribers had 300 or 500 type sets with dial blanks connected to magneto boxes. The operator rang the subscriber from her board using her ring key to supply ringing current from a standard WECO ring generator.”

He goes on to say that the Bell System had a like system in Nevada:

“There was a similar situation in Virginia City, Nevada with the subscribers having the old walnut and oak magneto phones with local battery. In this case, most subscribers resisted the cutover to dial service, since the magneto phones were quite elegant. . . all polished wood and gleaming brass bells. They were part of the period atmosphere of the town.”

This simple switching technology came within six years of outliving the most advanced telephone company on earth. But one manual local toll board remained in the public switched telephone network even longer. –>

J.R. Snyder Jr. reminds us that toll boards, manual long distance switches (internal link to article), were still working in the Bell System after the last local plug board was removed.

[Strackbein] Personal correspondence with Tom Farley, July 16, 2000. Another comment from Ray: “I didn’t know that Strowger was from Penfield. That may partially explain why Stromberg-Carlson located in Rochester. As an aside, there is a building in Rochester called “Carlson Park” (as in industrial park). The parking lot looks just like it did in the mid ’70’s when I last saw it (I was teaching a class for Xerox in Webster last year and mentioned that I used to work for Stromberg and someone in the class said that the old plant was still there — which it is — so I drove over for a peek. The only difference is that they have sub-divided the administrative offices into private office suites and businesses.) Except for the new business signs, everything looks exactly as I remember it from 25 years ago.”